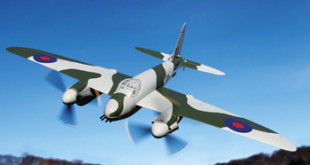 ParkZone has created several foamie warbirds in ultra micro sizes, and its latest is a BNF (bind and fly) 1/32 scale de Havilland Mosquito Mk VI. This neat little warbird is ParkZone's first twin-engine venture, and it works very well. The counterrotating 3-blade propellers are driven by 8.5mm coreless brushless motors, and the 1S 250mAh 3.7V 20C LiPo battery provides plenty of power to fly the model around for 12 minutes with throttle management. 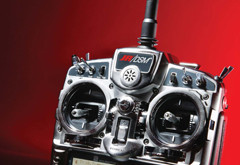 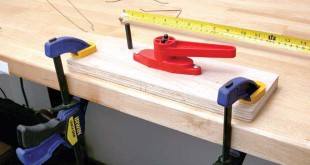 I don't know about you, but I am always onthe lookout for a new tool that will make mylife easier and let me get a job done faster.Don't get me wrong, I love building, but withall of life's distractions chipping away at myhobby time, I try to work as efficiently as possible.Consequently, I was thrilled when I saw aprototype of Du-Bro's new no. 480 E/Z Benderlast October. This production-quality tool willclearly speed up the pesky task of bendingpushrod ends and "I was soon to find” many other shapes from small-diameter wire.

According to Websterâ€™s, a Jackal is a smart-looking, fast-moving, smoothoperating, agile and intelligent mammal capable of extraordinary feats far beyond what you might expect from something its size. After four of us took turns flying the subject of this review, all of us now realize what Mike McConville had in mind when he designed this bird and named it the Jackal.

The Elektro Junior S is entirely constructed of injection-molded Graupner Solidpor foam. The kit includes the airframe, the Graupner Compact 345Z brushless motor, a Cam folding prop, spinner, all necessary hardware, carbon-fiber fuselage stiffener and wing spar, and photoillustrated directions with German captions. There was a small English section towards the back of the manual without photos. To be quite honest, the build was so straight forward all that is required are a few photos.

For those who have been in the hobby for a while, the name â€œCoxâ€ is no stranger. Many of us first started into the hobby with a Cox plastic control line model, and many RCers have used the venerable Cox .049 in various forms to power small aircraft, gliders or even helicopters. I started into the world of model airplanes with a Cox Blue Angels RTF model in 1977. Having sold millions of engines, it was hard to find anyone involved in this hobby who hadnâ€™t at one time ran a Cox engine. Back in the early 1990s, the status of Cox engines started to decline as various product disappeared off the hobby shop shelves, as well as many of the accessories needed to keep these engines running and tuned up.

Through the last two decades there have been many Extra 300s modeled, but there are only a few manufacturers that listen to their customers and refine their models. Aeroworks is one of those few! In its introduction of its .60/.90 size version, it incorporated the requests of its customers and added to its successful line of Quick Build series of aircraft.

In my 19 years of flying fullsize aircraft, I have flown three types of Cessna 182s: a squaretail model from 1958; a swept verticalfn model from the mid '70s and an R182 Skylane RG with retractable gear. All three were very stable and had a lot more get-up-and-go than the 172s I had flown. I always thought the 182 was a great airplane (even though it has a nosewheel) and would make a great RC model. Parkflyers.com has turned that thought into a reality with its nicely done, sport-scale Cessna 182 500-class brushless model.