Cox Engines Are  Back!

For those who have been in the hobby for a while, the name Cox is no stranger. Many of us first started into the hobby with a Cox plastic control line model, and many RCers have used the venerable Cox .049 in various forms to power small aircraft, gliders or even helicopters. I started into the world of model airplanes with a Cox Blue Angels RTF model in 1977. Having sold millions of engines, it was hard to find anyone involved in this hobby who hadnt at one time ran a Cox engine. Back in the early 1990s, the status of Cox engines started to decline as various product disappeared off the hobby shop shelves, as well as many of the accessories needed to keep these engines running and tuned up.

In recent years, Cox International has purchased entirely from the previous owners, all Cox 1/2A product, and has started to offer once again hard to find parts, accessories and other gear. Some new innovations such as the RC carburetor reviewed here, and others have been developed and propellers have once again been manufactured for sale.

For those who love these engines, it is a good sign for sure, and will hopefully allow those of us who still run small glow engines the means to do so for years to come.

I received a small box from Cox International, which was packed with all sorts of goodies! I havent been this excited to open up a parcel in some time! Taking stock of the decent product selection that was sent to me for review, I was pleased to see the following:

All items were well packaged in bags and padded wrap. Instructions were well written and clear, and included with all tools.

Cox engines use a hardened, formed-steel piston, which runs in a softer steel cylinder. The engines were both fit on the loose side, yet still needed to be run in. I used Wildcat 1/2A fuel, which is a 25-percent nitro fuel with a castor and synthetic blend oil. To break in the engines, I mounted them to the test stand, and first ran them very rich in short duration runs. Allowing cooling between runs is critical. Once several tanks of fuel have been burned, you can start to lean out the needle valve and let the engine turn up. Gradually, you can lean out the engine fully and once it will hold a peaked setting without slowing down it is ready to run.

To break-in my small engines, I mount them to this pre-drilled aluminum stock and then bolt it to my workbench.

The Red Stinger and the Sure-Start engine were very easy to get runningeven an experienced finger flip would get them running every time. I also tried out my very old AstroFlight 1/2A starter that my father bought me back in 1980 and that had both engines running immediately. I also tried the provided spring starter, on the Sure-Start engine. It worked very well, but I found it to reduce the maximum rpm by several hundred. I personally prefer to leave the spring starter off. 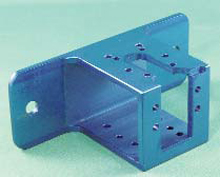 I tested the engines with both types of propellers and also with the Wildcat and also some SIG 1/2A fuel, which is a 35-percent nitro blend.

Here are the results for the Red Stinger: I also added one extra copper head shim under the glow head for the SIG fuel to prevent burning out the element. Runs were consistent, and the needle relatively easy to hit the sweet spot.

Running the Sure-Start (broken in with the throttle open fully) was done similarly. However, I just ran the Cox black 5×3 propeller, and Wildcat 25-percent fuel. I tested the ability to throttle down to a reliable, low idle. This test was done with the stock three fin glow head, the A style head which uses a button insert glow plug, and the B style head which uses a standard 1/4-32 long type glow plug.

Included with the engines were such accessories as: a Cox glow-head clip, a set of .049 wrenches, a piston/rod reset tool, three different glow heads and two different types of propellers.

If you have ever played with a Cox engine in the past, these new ones will be immediately familiar. The engines supplied for this review are based on the typical Cox extruded aluminum crank case, rear mylar reed valve; counterweighted crankshaft with pressed on aluminum drive washer, a plastic back plate that also houses the intake venturi, needle valve and acts as the radial

mount, the traditional steel connecting rod with a captured ball and socket link to the steel piston and the one-piece machinedsteel cylinder with varying patterns of exhaust and bypass ports with the threaded head.

These engines are not difficult to work on, but do require the proper wrenches, which are available from Cox International. Never stick anything into the exhaust ports as the soft steel cylinder is very easy to damage.

The Cox engines require periodic cleaning especially when run in a dirty environment. If any dirt gets under the reed, or in the needle valve assembly, disassemble and

clean immediately, or poor running will be the result if you can get it started at all. Clean it up and it should be just as good as new.

I am very happy to see that someone has taken up the task of keeping Cox engines alive and making them and a good variety of accessories available to the average modeler. With all necessary parts now once again available, anyone can enjoy the fun and excitement of running a small glow engine for relatively little investment. The new throttle works well, as does the rest of the product line reviewed. Keep an eye on Cox International for more additions to its already large and well laid out website and online store.