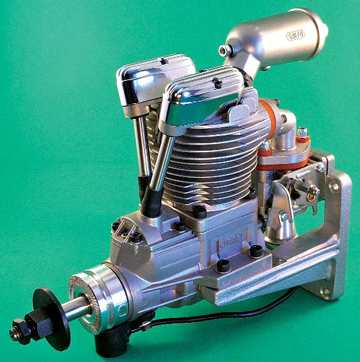 Although I have never reviewed the 1.80 glow version, I was extremely excited to get my hands on the FG-30, as I have seen several of these in fellow fliers aircraft. I was also interested in seeing how the interior compared to that of the FG-36, which I did review a few years ago in Fly RC. (find.flyrc.com/061122) 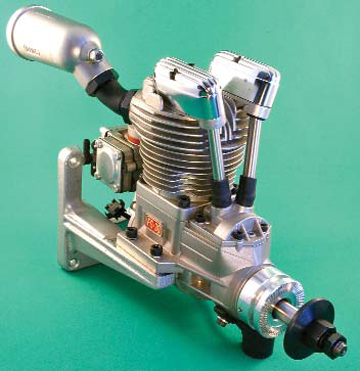 The engine comes wonderfully packaged in typical Saito fashion, nestled in a white heavy cardstock box with custom cut dense foam packaging. In this case, it also comes bolted to the engine mount. I know a lot of modelers dont really care how their engines are packaged, but the Saito really exudes a quality and classy look from the moment you get the box in your hands! Inside, the clean and wrapped engine/mount is well protected from any shipping damage. Also included are an adjustment wrench for the muffler nuts, the muffler and stack, a spark plug socket, bagged mounting hardware, a feeler gauge and tools for valve adjustment, the ignition unit and, of course, a quality instruction/operation manual. Lots of goodies to look at and go through!

Everything arrived intact and in pristine condition. The Saito exterior looks brilliant, with a fine beadblast finish. The casting quality is perfect, as is all exterior machine work. The most noticeable difference between that of the FG-30 and the FA-1.80 glow is the replacing of the glow carb with a gas pumper-style carb (similar to some of the Walbro offerings), the head being tapped for an NGK-CM6 spark plug instead of a regular 1/4-32 glow plug, and the larger size muffler.

One other neat thing I noticed almost immediately is that the carb already comes with a ball linkage installed, and it is a straight pull linkage! The throttle hook up couldnt be easier on this engine!

The included instruction booklet is excellent, giving precise instructions on all aspects of break in and running. The first thing to note is that the engine is designed to be run only with the included aluminum mount. The mount acts as a heat sink, transferring heat away from the engine and if run without it, you may have issues with the engine overheating.

Fuel can be any regular or unleaded gasoline, mixed in a 20:1 ratio with a quality brand of air-cooled, two-stroke synthetic motor oil. I chose Mobil two-stroke oil, as it is a proven full synthetic oil that I have used in several engines in the past. Unlike previously, the break in and long term running is to be done on the 20:1 fuel mix without going to a lower oil ratio.

For break in, the ignition unit is plugged in and powered by a 4 or 5-cell NiCd or NiMH or 2S LiPo pack of at least 1000mAh capacity. A 16-inch prop is recommended for break in, and of course make sure all fuel tank/bung/lines are gasoline compatible. I used an APC 16×8 prop. 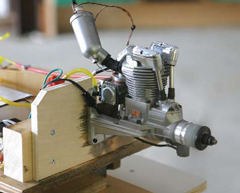 Around the time of my tests, the temperature was 58 F, humidity high at 79% and pressure was 29.7 inches of mercury and rising. I am at just shy of 1000 FASL. I measured my engines cylinder head and exhaust temperatures with the Eagle Tree data telemetry system. I used the Eagle Tree system to give me the rpm as well, with all information displayed on their LCD display unit. I confirmed the rpm readings with my Glowbee hand held tachometer.

Once set up on my test stand, I tried to start the FG-30. After several minutes of unsuccessful attempts to start the engine, a fellow flier suggested I open the carb slightly more than I had it set. Bingo! It started up immediately. It seems the carb linkage needs to be moved quite a bit off the stop limit before the carb barrel reaches the idle position. Keep that in mind, and it reminded me that sometimes another person can suggest a simple fix to a problem created by the user. Again, this was a fault of mine and in no way a problem with the engine.

After I figured where to set the carb for idle, I easily hand started the engine after turning the engine through compression a number of times to prime the fuel line. The booklet states electric starting is the preferred method, but with the docile characteristics of a quality autoadvancing ignition unit, hand starting is easy and I recommend it (but please still use a glove as some props have sharp edges). For the first 10 minutes of running, it is recommended you do not exceed 4,000 rpm. After I commenced with throttling the engine up to higher speeds, I noticed the carb was very well set from the factory. Almost no adjustment was necessary (although I did lean the high end and idle adjustment slightly after some more run time was accumulated)! No mention of more extensive run time is required before flying, or in my case prop testing, so I proceeded with the prop testing.

Here are my results obtained while running in the engine: Although the engine is capable of running large props effectively without overheating or back firing, the recommended static rpm is approximately 8,300 to 9,000. The 16×8 and 17×6 were the two props the engine seemed happiest with. Also, keep in mind that the engine can still start to pre detonate if set too lean.

Throughout all the bench tests, the engine behaved perfectly, with easy one or two flip starts. This engine was actually purchased by Thayer Syme and he will soon flight test it in a quarter-scale model he has, thus no flight testing was performed by myself.

FG-30 has the following dimensions, all in inches: 31/4 from the prop drive face to the centerline of the cylinder, 61/4 from the prop drive face to the rear of the mount (with an additional 1/2 needed to clear the carburetor rear surface). 41/2 is the height from the crank center line to the top of the rocker covers. The width of the beam mounts is 23/4, with the hole spacing at 25/16.

Much like the case with the FG-36, Saito has taken another proven glow engine and has given the modeling world a great gas burning alternative with the FG-30. The engine produces approximately the same amount of power, with the ease and reliability of a wellbehaved spark ignition system. No longer do you have to spend money on expensive glow fuel either! The easy-to-handle FG-30 is suited for scale, sport, aerobatic and Sunday flyer types equally. Great throttle ability and low fuel consumption are two of its other key features. And finally, a low exhaust note that will be accepted at even the strictest of flying fields make this one a winner in every respect! I guarantee you wont be disappointed in choosing the Saito FG-30 for your next model!