Starting your 3D Aerobatic Journey on the right foot 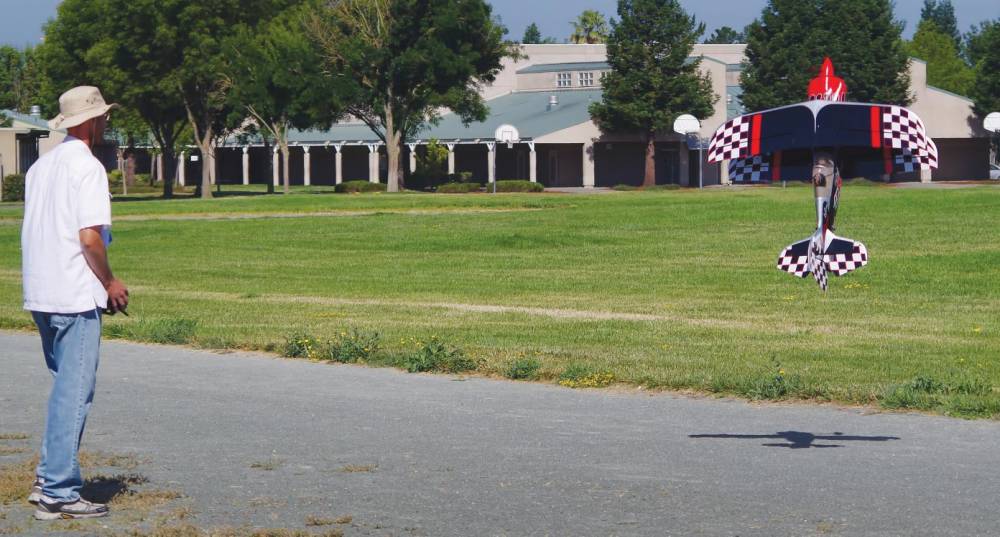 I remember with great clarity the first time I saw a competent 3D pilot in action, performing wild tumbles and inverted harriers and hovering within inches of the ground. My jaw hit the floor and my concept of this hobby changed forever. I was able to get some helpful information from that pilot and other pilots along the way as I began the long (and immensely enjoyable) process of developing my own 3D aerobatic skills. In the spirit of demystifying the seemingly magical nature of this flying style, here is the first in a series of articles aimed at providing a solid foundation to pilots who want to begin a journey into the realm of 3D aerobatics.

WHAT IS 3D AEROBATICS?

To move through the world of 3D aerobatics (also referred to as “3D,” “Extreme Aerobatics (XA),” “Freestyle,” etc.), it’s first helpful to understand some common terminology. The term “aerobatics” is a linguistic blending of “aerial” and “acrobatics.” Wikipedia defines aerobatics as “… the practice of flying maneuvers involving aircraft attitudes that are not used in normal flight,” which dovetails with their definition of 3D as “…a form of flying … specific aerial maneuvers … performed when the aircraft has been intentionally placed in a stalled position.” Even though this description is accurate in theory, in practice it’s insufficient in that it doesn’t take into account the multi-dimensional nature of the style. It’s true that 3D flying involves a tremendous amount of post-stall activity, but most often that occurs dynamically, involving a rapid transition in and out of post-stall, aggressive tumbling, high-energy aerobatics and even some precision maneuvers. This multifaceted approach is, yet again, a reminder of the width of this style’s flight-envelope. 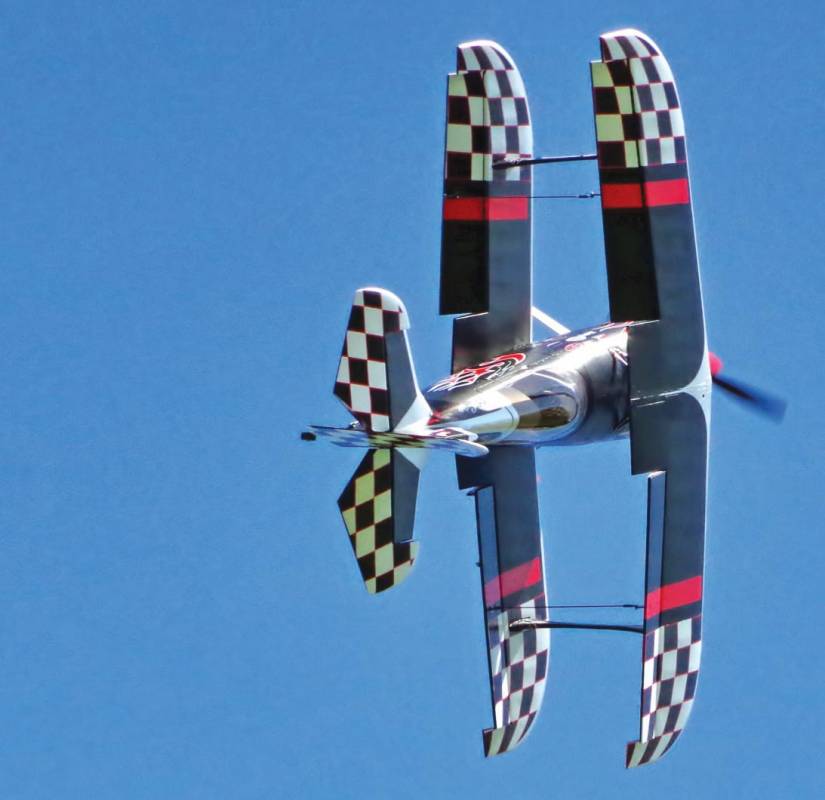 Most RC pilots have a similar back-story. Beginning with a small 3-CH trainer, a pilot typically learns the basic skills required to keep a plane airborne and over time, transitions to larger 4-CH planes such as trainers (with ailerons/flaps), sport planes and warbirds/jets. Although these planes can provide tremendous challenges, for those pilots for whom progress occurs quickly, a ceiling is often reached. Not withstanding the fact that pilots can dedicate themselves to achieving mastery of skills in scale, gliding, traditional aerobatics, IMAC sequences, racing, high-speed flight, etc., there is perhaps no style of flying that has a learning curve so steep (and so unlimited) as 3D. There are many benefits to developing a competency in 3D. Here are a few stand-outs:

• As 3D flight requires a constant utilization of all four channels (throttle, ailerons, elevator and rudder), it uniquely illustrates the axiom, “All flying helps all flying.” In other words, when you work on building your 3D skills, your ability to fly all other styles of plane will be enhanced mightily. For example, 3D requires a comfort with the use of rudder that far surpasses what’s required with scale, trainers, sport and warbirds.

• Along with having perhaps the widest flight-envelope, 3D allows pilots to make use of surprisingly small flying environments. Once pilots develop even the most basic post-stall skills – such as the harrier and hover – they will (particularly with smaller, foam 3D planes) be able to effectively utilize backyards and small parks, where many other styles of plane would be inappropriate given higher stall-speeds and lack of a runway. As 3D flight can blur the line between a plane and a helicopter, large flying environments are no longer mandatory.

• For those pilots who enjoy research and taking a step-by-step approach to understanding new skills, each and every 3D maneuver involves its own combination of specific inputs and timing. It can be quite rewarding to go through the process of identifying a new maneuver, learning and developing its required “pre-requisites” (the maneuvers one must first be compe- tent at), attempting, failing and then final- ly succeeding.

• Once a pilot has developed a handful of 3D maneuvers, a personalized routine can be created, bringing an element of choreography into the mix. Instead of taking off, meandering around for five minutes and landing, pilots often feel more purpose to their 3D flights, whether it’s practicing specific maneuvers or combining several maneuvers into a “performance”. 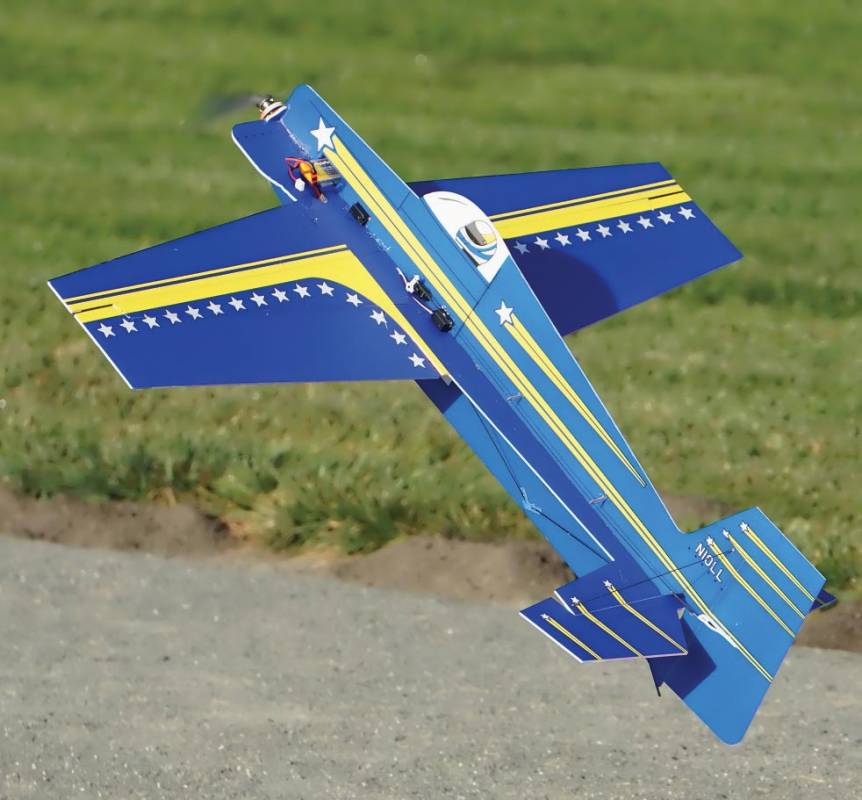 WHAT MAKES A PLANE A 3D PLANE?

• Higher power-to-weight ratios: 3D planes must be able to transition quickly from post-stall flight (often low on the deck), through rocket-like punch-outs and into high-energy aerobatics. Moreover, power must be on tap for getting your- self out of trouble should you get too close to Terra Firma. Traditionally, 150- 200 watts per pound of all-up-weight (AUW) provides the necessary power for virtually all 3D maneuvers. As limits are always being tested, it is not unusual to find modern, higher-end 3D planes pushing that number well past 250.

• Larger control surfaces and degrees of deflection: Pilots must be able to maintain control over their planes during post-stall maneuvers when angles of attack (AOA) are extreme and forward airspeed ceases. To do so requires extremely large ailerons, elevators and rudders, along with larger-bodied fuse- lages providing extra lift. These large- area control surfaces must be capable of deflecting to at least 35 degrees for ailerons and, for tail surfaces, 45 degrees or more. This deflection is required to force the plane into the wild contortions necessary for completing more advanced maneuvers.

• Higher-quality components: Servos (most often metal-geared and digital) should be fast and powerful, preventing blowback (inability to hold surface position against force of air). Motors should be capable of handling high levels of sus- tained current, along with repeated full- throttle bursts. Speed controllers (ESC) must have a fast throttle response and good heat-dissipation, as well as being programmable for ideal motor performance. The battery elimination circuit (BEC) – whether internal to the ESC or as a stand-alone external unit – must be able to handle the expected servo load to avoid the all too common – and terrifying – “brown-out” (momentary receiver shutdown when voltage from BEC drops below receiver’s nominal limit).

• Lower wing-loading (WL): WL represents a ratio of a plane’s AUW to its total wing area. Small, foam, profile 3D planes can have a WL as low as five ounces per square foot, while for larger wood 3D planes that number can approach (and exceed) the high teens. Planes with high WL can be thrown into aggressive tumbling maneuvers, but when it comes to post-stall, that higher WL often contributes to instability and wing-rock. The lower a plane’s WL the more “floaty” it will feel, resulting in higher degrees of confidence when it comes to bringing your plane in for some low and slow fun. It’s been argued that wing cube-loading (WCL) is a more accurate determination of a plane’s flight characteristics, but that’s a mathematically complicated conversation for another day. 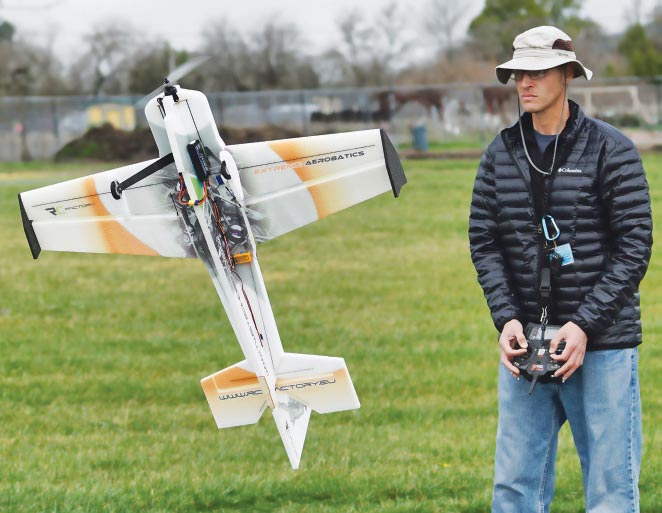 Even though it is tempting to jump directly into the deep end of our hobby’s pool, moving too quickly when you’re trying to learn new and difficult skills often results in headaches, frustration—and an empty wallet. If your goal is to develop a true competency in the world of 3D aerobatic flight, building a strong foundation, through a measured and patient approach, and a timely progression of skills – will pay enormous dividends in the long run.

Share
Previous RAF Museum Tour
Next Get Organized with PVC