Warbirds Over the Rockies

Story And Photos By Sean Curry

Arguably the most picturesque Warbird Rally in the country, Warbirds Over The Rockies (WOTR) 2016 has been another epic adventure. Set in Arvada, Colorado, the event has the beautiful backdrop of the Flatiron rock formations with Boulder and the Rocky Mountains just beyond them. I always make some time to drive around this incredible part of our country while I am there and recommend you do the same if you visit the event.

Brian O’Meara has been rubbing elbows with the best of the best in scale modeling for over four decades now. Still cruising the warbird circuit, he has taken his cumulative experience and channeled his dedication into his annual warbird event: Warbirds Over The Rockies, with 2016 being its 13th year. Brian knows how to put on a World Class show with a few over the top additions that make the event extra special. One of the additions is a special guest speaker. This year, we all had the pleasure of having Colonel “Bud” Anderson speak to us at the Saturday night banquet. He spent the entire weekend at the event, taking in the show as well as offering his time to talk and sign books, planes, etc. He was very accommodating and stayed busy all weekend.

What else is unique about WOTR? How about explosions? Lots of them! The husband and wife team of Larry and Ginger from Angel Light Pyrotechnics load up the field each morning with explosives for one of the most exciting (and LOUD) half time demos I have seen to date.

As the name implies, this event is for Warbirds only. This includes airplanes that were flown in combat as well as training aircraft, transports, etc. Pretty much anything that had a military registration number, from any Air Force in the world, can be entered. All eras of military aircraft were represented. Everything from WWI biplanes putting around the sky to modern jets flashing past were the norm throughout the event. Even with this mixed traffic, there were no “incidents” that I know of, which says a lot about the competence of the flight line crew. The Arvada Associated Modelers were the host club and handled many of the duties required at large events like this, including parking lot patrol and the aforementioned flight line duties.

Although WOTR is a decidedly West Coast crowd, the event brings in people from all over the Country and even a few from overseas. I always enjoy meeting new people at these events I attend and this year was no different. Trond Hammerstad travelled all the way from Norway to watch his latest creation take to the air at WOTR. It was a massive 1/4 scale Airworld F-104 which he recently built for Brian O’Meara. The build quality and finish were outstanding. Ali Machinchy, who has more time than anyone on the planet flying Airworld F-104s, was on hand to make the plane look as good in the air as it did on the ground. I think I saw both Brian and Trond sweating a bit on a few of those fast and low passes! The plane deservedly won the coveted “Best Jet” award at the Saturday night banquet. This giant plane represented only 1/10 of the private Air Force that Brian had on hand at the event, by the way. Among his other planes were his B-25 bomber, B-26 bomber, Sea Fury, Airwold Cougar and a MASSIVE P-47 to name a few. All of these were either 1/4 or 1/5 scale with the P-47 being the exception at nearly 1/3 scale. Power for the P-47 was a very impressive four cylinder 500cc engine which was started by remote!

Brian wasn’t the only guy to bring along a hangar full of airplanes. Evan Quiros hails from Texas and brought a slew of German hardware with which to beat up the skies. Evan is a prolific builder and has a knack for Axis aircraft. He does excellent work and is a true modeler, having designed a few of his models from the ground up. Check out his website (www. evoshangar.homestead.com) if you want to see some cool stuff. Included this year in his arsenal were several FW190s (both long and short nose versions), an ME-109 and a rarely modelled Dornier DO335. This push/pull German plane was the fastest fighter the Third Reich produced during the war and could reach speeds of nearly 500 mph! Evan’s efforts with his DO335 helped him win the “Overall Best Scale Presentation Award.”

Each year I look forward to seeing what Brian Young brings to the event from his hometown in Huntington Beach, California . He builds large, fast fighter planes which in the past have included a blown up 113” span Vailly FW190 and a gorgeous Meister Zero.

This year, he had a new model to show off, a Jerry Bates Hawker Tempest Mk II powered by a Moki 250cc radial. What a sweet combo this plane was and Brian flew the heck out of it like he does all of his models. Nothing sounds sweeter than the Doppler effect of a Moki going by at 150 mph or so! I wasn’t the only one to think it was cool because Brian won the “Pilot’s Choice” award.

The Horizon Hobby gang was at the event in full force this year. Peter Goldsmith, Craig Greening and Ali Machinchy travelled from Horizon’s headquarters in Illinois along with a trailer full of Hangar 9 warbirds. Included were a bunch of their 60cc Mustangs and Corsairs. Ali, with fellow teammates Tony Quist, Russel Stift and Ken Mcspadden put on a really cool flying show each day with four of the large Mustangs in formation. They were really together which is hard enough when you try it with two planes, let alone four! All four pilots walked away with Trophies for “Best Formation.” Horizon also had a booth set up. It was not as a sales booth, but rather as a meet and greet where you could talk to the team members and get your hands on a few of their products. If you were in the market, it was nice to see products in person rather than just stare at them on your computer screen before committing to buy.

The group from California, who have adopted the nickname “Warbirds West”, held a really cool get-together at the field on Friday night.

Michael Fetyko did an excellent job of organizing the soiree and even got a helping hand from our own East Coast “Warbird Alley” chef, PJ Ash, helping to blend the East Coast/ West Coast vibes. Adult beverages as well as soft drinks were flowing late into the night and PJ cooked more than enough food on a massive BBQ for everyone. There was even a cake! These sorts of parties are really a great time to wind down and talk shop with fellow modelers. Although the temperatures were nearly perfect all weekend during the day, staying after dark invited long sleeve shirts and jackets which is a perfect way to end a day as the sun sets.

Saturday night is reserved for the event’s banquet. It is a catered event with a full bar and a delicious, full-service meal. The banquet serves several purposes beyond nourishment and libations. It offered an excellent hall for Colonel “Bud” Anderson’s speech and video presentation. This was really a treat and we all learned a few tidbits about “Bud” that you aren’t going to read about in history books. He seemed to be in excellent health and was very spirited, great news considering he is now 94 years old! Bud is currently the oldest living (triple) Ace from WWII with 16.25 aerial victories. All of the awards were given out at the banquet as well. Once again, Tighe O’Meara handcrafted each of the awards … which were really cool by the way! A welcome, unique addition to the lucky recipients’ trophy cases I am sure. The last task on hand at the banquet was the annual auction. Tons of deals were to be had, thanks to the generous sponsors who donated products. Sponsors also supported the trophies, by the way, so please be sure to support them in your hobby. Without them, these events would simply go away. Speaking of support; the state of Colorado community benefits from this event also thanks to the generosity of Brian O’Meara and his wife Bonnie. A driving force for their fierce commitment to pulling off this event is the fact that they channel a portion of their proceeds to “Mental Health America of Colorado.” This year they were able to donate about $20,000 to their cause.

So if you don’t have a warbird in your hangar or on your bench, what are you waiting for? There are hundreds, if not thousands of subjects to choose from and endless paint schemes, planes as simple to fly as Piper L-4 (a Cub in military guise) to the challenges of something like a B-2 bomber! I promise if you join this crowd of warbird nuts you will enjoy every minute of these specialty events, from the awesome subjects and flying to the true camaraderie that we share. Hope to see you at the next one! 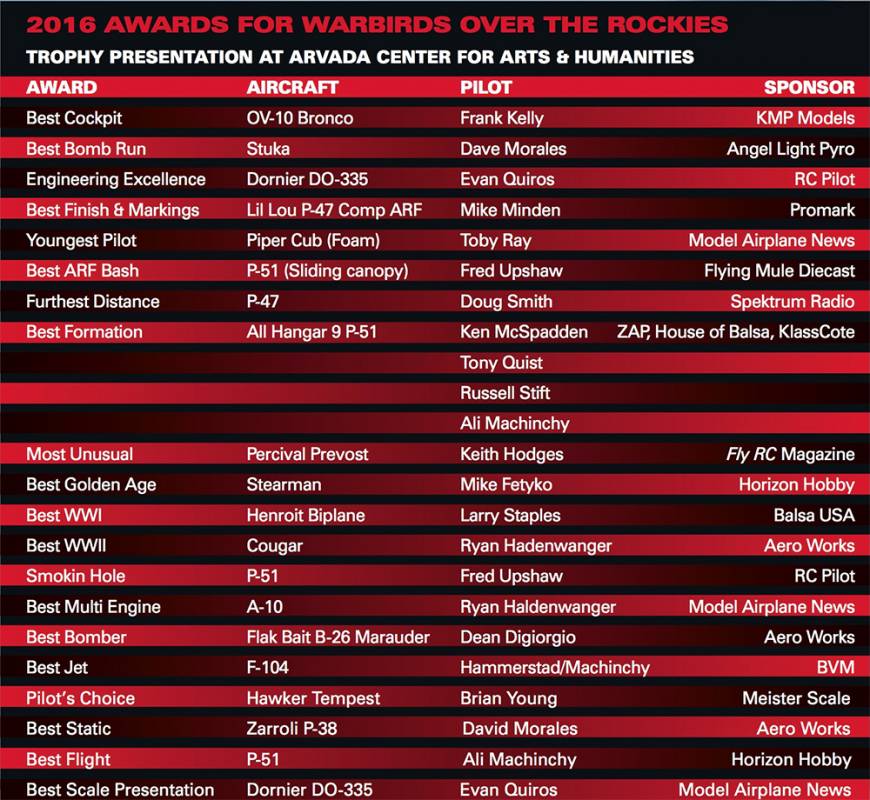