Home » How To's » Make Your Own Diesel Conversion Head

Make Your Own Diesel Conversion Head

Most modellers have heard of or seen magazine ads for diesel conversion heads for our two-stroke glow engines. Although running model diesel engines hasnt been extremely popular in North America, model diesel aircraft engines have been commonplace in the rest of the world, including Great Britain, Australia, New Zealand and many European countries. Many model engine companies do not produce dedicated diesel engines, so it is popular to buy a conversion head which replaces the fixed compression glow head. These conversion heads have adjustable contra-pistons, a unique movable plug which sits within the head and can be adjusted up and down to vary the volume of the cylinder, and therefore the compression ratio.

Commercial heads are not always available for each brand and size of engine, but that can be easily overcome. If you want to try crafting a head of your own, all you need is a little aluminum and a lathe and drill press. Nearly every club has someone with, access to, these basic machine tools. If you dont have the tools yourself, buy a box of donuts and see if your clubmate has some free time one evening or weekend afternoon. You dont need large equipment for this project either. Sherlines lathe and mill, or even a benchtop drill press, are more than capable of producing a model diesel head.

This brief article explains how I produced a diesel head for a small two-stroke engine. This design was refined over many prototypes and many hours of running. I have made several hundred heads for other modellers and all have been successful with positive feedback.

Model diesel engines are really compression ignition engines. The heat caused by compressing the fuel-air mixture actually initiates ignition. Typical model diesel fuel is a mixture of kerosene, lubricating oil, and ether. A small percentage of an ignition aid is also commonly used, typically two to three percent by volume of either amyl nitrate or iso-propyl nitrate. A common mix for modern ball bearing equipped, ABC type engines would be 45 percent kerosene, 30 percent ether, 22 percent oil and three percent amyl nitrate. For older lapped iron/steel engines with plain bushings, you can lower the kerosene slightly and increase the oil content. For smaller displacement engines, reducing the kerosene and increasing the ether will make starting and tuning easier. Mixing your own fuel is not difficult, but obtaining the raw materials is not easy in all areas. It is often best to buy a premixed fuel if at all possible. Fuel can be purchased from Eric Clutton, a.k.a. Dr. Diesel, and Bob Davis of Davis Diesel Development.

Tuning a diesel is not harder than tuning glow engines. However, it is different. To start, you back off the compression adjustment screw, and with the needle valve set slightly rich you prime the engine and start flipping (a starter is generally not a good idea due to the higher compression and chance of hydraulic lock and damage to the connecting rod and/or piston) while slowly increasing the compression setting. The engine will start to fire, and once it starts running you increase compression to smooth out the firing cycle, and at the same time lean out the mixture until the engine is running cleanly. It is a balance of the needle valve and compression setting which seems difficult at first. However, in practice it is quite easy! It is one of those things that is easier to demonstrate, than try and explain how to do it.

Why one would want to run an engine as a diesel- is a topic debated by many modellers. Due both to the properties of kerosene and the fact the compression and therefore ignition timing can be adjusted, model diesel engines can turn larger propellers without overheating, they run longer on the same volume of fuel, and of course can be started and run without any batteries, and there is no glow plug to burn out. They are just another alternative to running engines with glow fuel or gasoline. You will find that the neat factor is quite high and a diesel certainly smells and sounds different!

BUILDING YOUR OWN DIESEL CONVERSION HEAD

Lets go through the process of producing your own home made conversion head. If anyone has any questions, you can email me at andrewc @flyrc.com and I will try to help. 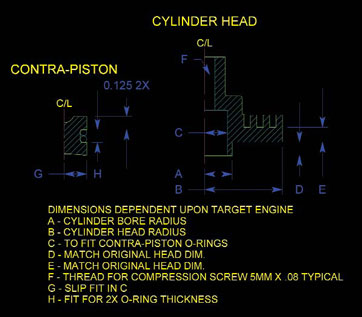 If you like trying something different, try running one of your engines as a diesel. Making the head yourself is sure to impress some of your flying buddies and even your, and lets you run an engine for which a commercial diesel head may not be available. The machining steps are straightforward and not at all that difficult, making this project perfect for beginning machinists and experts alike. It is an enjoyable way to explore the hobby further!