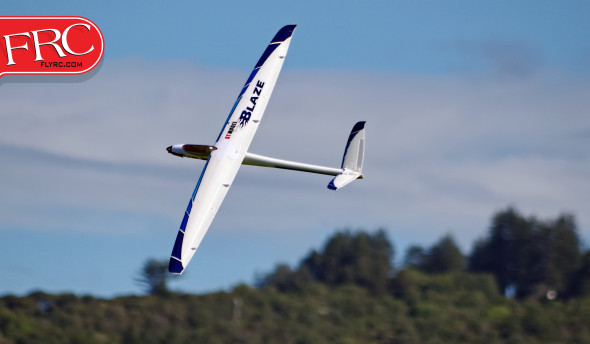 Pilots who like to stretch their hobby dollars will want to take a close look at the ST Model Blaze. This receiver ready model comes fully equipped with a factory installed brushless power system and full complement of nine gram servos. Eye pleasing aesthetics include a straight, thin chord wing with up-swept tips and stylish looking V-tail. Capable of rocketing almost straight up out of a pilot’s hand on launch, this durable carbon reinforced foamy costs a little over a hundred bucks and can be used by pilots who are curious to sample hotliner style flying. What’s not to love!?

Though some sailplane purists may argue the semantics of the definition and thus deny hotliner status to less exotic models equipped with more mundane power systems, a class of sailplanes equipped with less than insane amounts of power but nonetheless capable of much of the same extreme in-flight performance as the big F5B boys has given rise to the term “warmliner”. While composite construction models usually come in at a premium price point, foam composition models can serve as an alternate and eminently more affordable option. Pilots interested in exploring the excitement of this type of high performance flying without spending an arm and a leg might want to take a peek at the EPO foam composition ST Model Blaze. With a wingspan of just under 62 inches, the Blaze’s thin, narrow chord wing and V-tail mimic the design aesthetics of higher priced hotliner models. Plastic and carbon are used to reinforce and rigidize this foam airframe. The Blaze is a receiver ready kit, meaning that all servos and a brushless power system are already installed. A pilot need only supply a radio system capable of performing a V-tail mix and a three cell 1300-2200mAh flight battery to get the Blaze started. 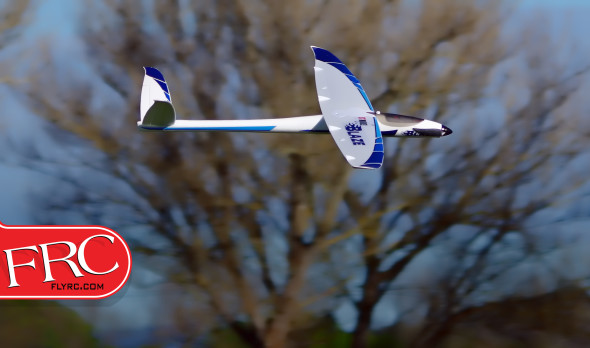 ASSEMBLY TIPS
This foam sailplane can be assembled using a few basic hand tools. Minor but time consuming details, such as gluing the control horns to the control surfaces, are handled at the St Model factory. The Blaze uses a V-tail configuration tail for rudder and elevator controls (ruddervators). Pilots will hence need to provide a radio system that is capable of doing a V-tail mix. Most modern programmable transmitters, including the Tactic TTX850 SLT compatible transmitter that we used, include this programming capability. The twin V-tail halves come out of the box with nine gram sub-micro servos already in place. We liked the way that ST Model conceals the tail servos using a white plastic cover. Like other pieces of plastic used on the Blaze airframe, this cover also reinforces and strengthens the EPO airframe. Pilots will however need to first remove the pre-installed ruddervator push rods and servo horns in order to install the plastic cover. The pair of servo extensions, which the factory installs and routes forward in the fuselage for connection to the radio receiver, must be carefully stowed into the relatively confined space offered by the narrow Blaze fuselage while assembling the tail. 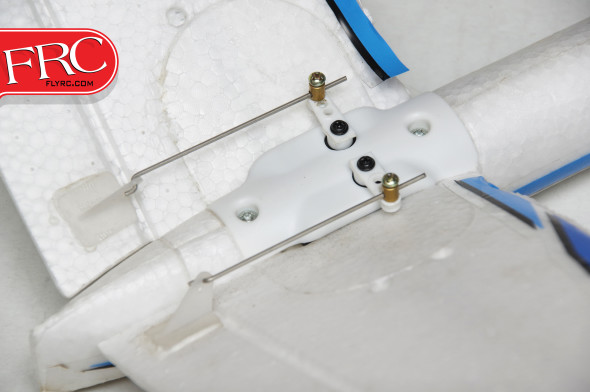 The thin, two piece Blaze wing uses a large removable carbon rod as its primary method of reinforcement and strength. Smaller carbon rods are also permanently embedded into the wing halves. Once the two wing halves are mated together and mounted to the fuselage, several stout pieces of white plastic serve as reinforcements for the wing retention fasteners. Though pilots using a four channel radio system will need to connect the two ailerons to one channel using an included servo Y-cable, our use of a Tactic TR625 six channel receiver allowed us to connect each aileron to its own channel. This setup comes with the added benefits of easy sub trim setup and the option to experiment with various flap or spoileron mixes if desired. Sailplane pilots who prefer their ships sans power systems can remove the factory installed brushless outrunner and configure their Blaze as a true glider. ST Model includes a blank foam nosecone and remote tow release mechanism in the box. Should they choose this route, pilots will need to source an additional micro servo to operate the release mechanism. 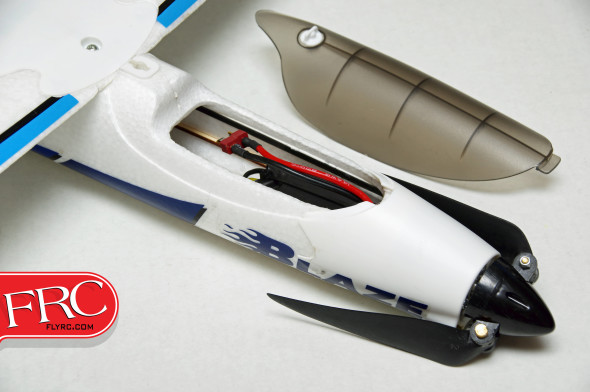 The final step of the Blaze assembly involves adding a splash of orientation enhancing color by applying the included sheet of bright, multi-shaded blue Blaze graphics. When initially unpacking our Blaze components, we discovered that this of sheet graphics had been somewhat unceremoniously wadded into a ball and stuffed into the corner of the slender Blaze box. Even though we flattened the sheet out and left it under the weight of a kitchens worth of large cookbooks for several days, we found it somewhat difficult to get the graphics to remain in place on certain parts of the airframe. We finally resorted to a few strategically placed pieces of Blenderm tape to anchor a few of the more stubborn graphics in place on the fuselage and wingtips. Another possible solution would be to airbrush a few light coats of water based polyurethane clear coat over the entire airframe. 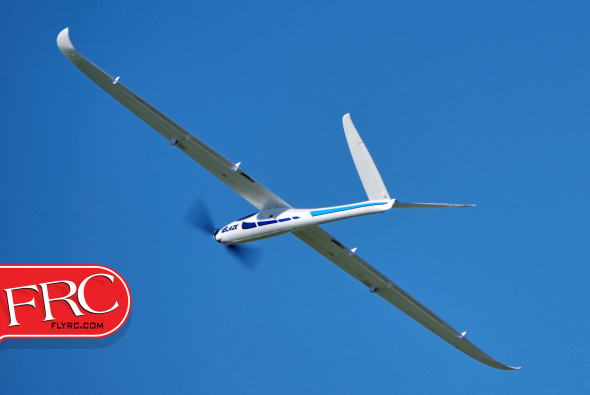 ST Model recommends a 3S 1800-2200mAh LiPo battery be used to ignite the Blaze. With the Tactic TR625 receiver pushed towards the aft end of the battery bay, we did manage to squeeze a 3S 11.1 volt 2200mah in place. Though like most pilots we are attracted to the potentially longer flight durations offered by larger capacity batteries, the mass of this pack resulted in our Blaze being hopelessly nose heavy. We thus fell back to a more CG friendly 3S 1800mAh pack for the maiden flight. The quarter turn, twist lock quick release mechanism holds the tinted canopy securely in place and makes battery swaps quick and easy. Our much used and ever faithful EagleTree eLogger notified us that the Blaze’s brushless power system was good for around 250 watts of static power. With our Blaze tipping the scales at a little over two pounds ready to fly, this calculates out to an impressive but not necessarily ballistic 125 watts per pound worth of performance. Using a higher C rating LiPo may push that number up by 10-20%. The included 30 amp speed controller comes with its braking option enabled. This feature encourages the included 10×6 folding prop to snap rearward and fold against the sides of the fuselage any time the throttle is killed. Pilots new to a V-tailed model should spend a few minutes ensuring that the rudder and elevator deflections are correct. The Blaze manual correctly explains and illustrates the proper and potentially confusing V-tail rudder deflections. 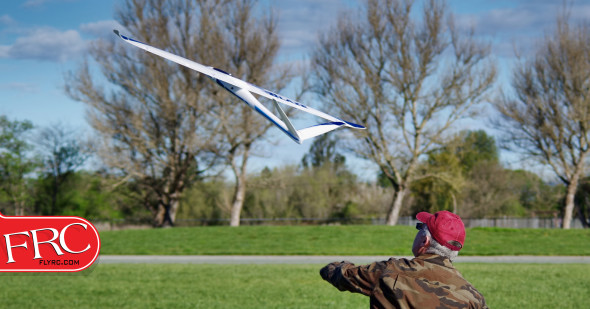 Launching the Blaze using a conventional overhead toss is a no-brainer. Run the throttle up to 75% and it will fairly fly right out of your hand! Given the overall design intent of the model however, we prefer to use a slightly more exciting launch method. Grip the Blaze fuselage forward of the wing in an overhand grip. Run the throttle up to 100%,release the Blaze with a subtle upwards flip and it will accelerate almost straight up like a rocket! Leaving the throttle at full and maintaining the climb for 10 seconds or more will transform the Blaze into a mere speck in the sky. A pilot’s eyesight will ultimately dictate when the throttle should be killed. With the power off, we liked to push the nose of our Blaze over and make the descent in the same aggressive manner as the ascent. Pulling out of the power-off dive a dozen feet above the dirt caused our Blaze airframe to emit an ear-pleasing whistling whoosh as it raced by. The sound of a sailplane airframe ripping by at high speed with the power off is part of the allure of hotliner style flying. The Blaze is more than capable of performing any variety of aerobatics. Performing them with the power off is more challenging and a great way to learn energy management. 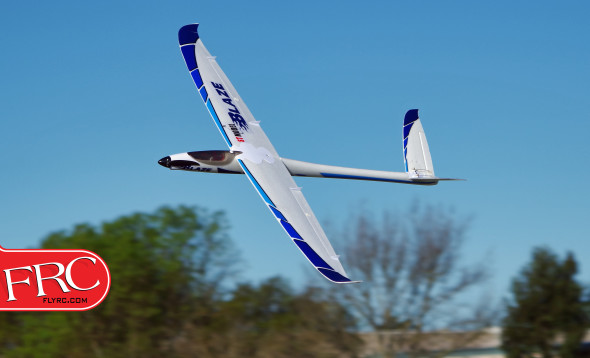 Sailplane pilots will inevitably attempt to use their models to sniff out thermals. Though we did notice our Blaze would often signal its passage through rising air, we found the airframe a bit too portly to take advantage of the free elevator ride. We even put our Blaze on a diet by switching to a 3S 1300mAh LiPo. This trimmed the weight to a little less than 31 ounces and did noticeably improve the Blaze’s thermal hunting abilities. The Tactic TTx850 transmitter features a pair of flight timers. We configured one timer to count down from five minutes and programmed the other timer to count up from zero and increment only when the throttle cut was disabled. This allowed us to keep track of both total motor run time and total flight duration. On several flights, we were able to keep the Blaze in the air for total flight durations of 12-13 minutes. Belly landing the Blaze is a breeze. Like most sailplanes, the Blaze is never in a hurry to give up its final few feet of altitude. Though pilots unaccustomed to the hang time of a sailplane on final may have to discipline themselves to set up a longer, more deliberate approach, the Blaze is well behaved throughout the landing approach. Hold it off with small inputs of up elevator once in ground effect and it will eventually just fall to the earth and slide smoothly to a stop.

>> A 10×6 folding prop keeps the Blaze as streamlined as possible when the throttle is off.

>> The tough EPO foam composition airframe is durable and light.

>> An included tow release mechanism and nose blank also allows the Blaze to be built as an unpowered sailplane. 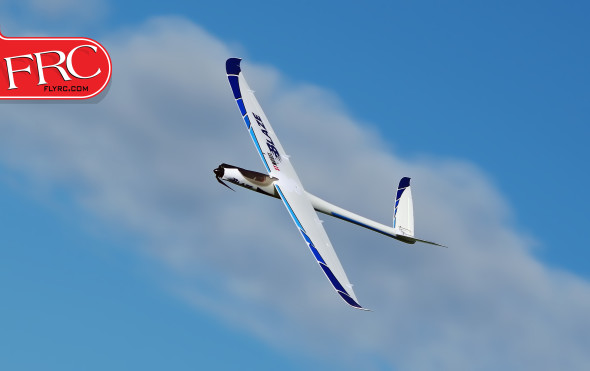 Though pilots who firmly believe that “you get what you pay for” may suspiciously raise an eyebrow when they come across the ST Model Blaze on the Tower Hobbies website, we couldn’t be more pleased with the performance and value of this EPO foam, receiver ready electric sailplane. It’s broad, slow-to-fast performance envelope makes it a model that can even be flown by newer pilots. Though not as insanely overpowered as a true hotliner, the Blaze offers pilots who may be curious about that genre of the hobby an affordable and durable , entry level platform. As a bona-fide warmliner, the ST Model Blaze allows pilots to set the sky on fire without burning a hole in their pocket!