2014 has been a banner year for Team Futaba. It’s gone from its recent successes at the Scale Aerobatics and Scale Nats to complete domination of the F3A Precision Aerobatic National Championships in Muncie, IN. The week began with 39 competitors vying for top honors. By the time the finals rolled around, there were only 8 pilots still in the running. Seven were members of Team Futaba and all eight had something else in common: they were all competing with Futaba radio systems. Despite fierce competition, Team Futaba emerged triumphant with seven of the top 8 spots. Andrew Jesky, who was dominant throughout the week, won all four final rounds to take the F3A Nationals Championship. Jason Shulman, who finished second, exhibited immense grace under pressure by following a less-than-perfect Unknown round with his best performance of the whole competition. Brett Wickizer completed the sweep, turning consistently strong
performances and near-perfect flying into a third place finish. In addition to their individual titles, their 1-2-3 sweep of the podium automatically qualifies them to be the three pilots to represent the United States at the 2015 F3A World Championships in Switzerland next year. Congratulations to Andrew, Jason and Brett on their double distinctions and to the eight finalists who put their trust in Futaba equipment. 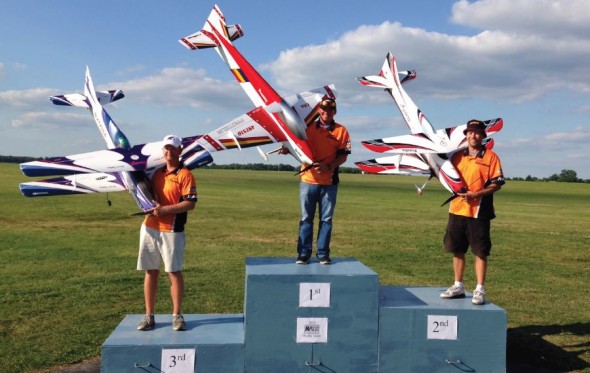