A miniature Mossie you can take to the park

As a youngster growing up in the 60s, I was enamored with airplanes. Whether they were in the sky, seeing them at the local airport, my fathers RC models that he was building in the basement or the plastic ones I assembled, I just couldnt get enough. Somehow, I think I single-handedly helped to boost the sales for the companies selling those scale plastic models that got to go flying after I built them. And, that flying was either by me holding the model in a hand and running around the house or the yard, or hand-launching it to see how far it would actually fly.

Back then, I always thought how cool would it be if I actually had one that flew with a tiny RC set up. I remember a 1/32 scale Mustang from Monogram that seemed like the perfect size to zip around the yard when we couldnt go to the RC field. Well, fast forward 45 years (did I really just type that number?), and lo and behold, RC technology has caught up with my decades old dream.

ParkZone has created several foamie warbirds in these ultra micro sizes, and its latest is a BNF (bind and fly) 1/32 scale de Havilland Mosquito Mk VI. This neat little warbird is ParkZones first twin-engine venture, and it works very well. The counterrotating 3-blade propellers are driven by 8.5mm coreless brushless motors, and the 1S 250mAh 3.7V 20C LiPo battery provides plenty of power to fly the model around for 12 minutes with throttle management.

Typical of ParkZones Ultra Micro series, the Mosquito comes completely built and packed in a handy carrying box that has a cut-out foam insert to protect the model during transportation. The motors, ESCs, propellers, radio equipment, control linkages, main gear and steerable tailwheel are all pre-installed. Also included are the battery, its charger and the chargers alligator-clip leads that go to a 12V battery source. An instruction manual in four languages rounds out the package.

First up is charging the LiPo with the supplied charger that requires either a 6V or 12V battery or a 12V AC/DC power supply to turn it on. With the charger connected to a power source, select the 0.7 amps reading on the charger by using the plus or minus buttons. Once 0.7 amps is set, connect the 250mAh LiPo to the charging lead and hit the start button in the center. When the LiPo battery is fully charged, the LEDs will illuminate and flash in a sweeping arc from side to side.

Install the battery, but dont plug it in just yet. Place the forward gun hatch in position and then balance the Mosquito. Move the battery fore or aft to get the Mossie to balance at the recommended CG of 38mm (1.5 inches) aft of the leading edge at the wing root. Mark this position so you have it the same each time.

Plug in the battery, bind the receiver to the transmitter and check that the control surfaces move in the correct direction. If the transmitter shows that all sub trims are at zero but the elevator or the rudder still arent centered, take a small pair of needlenose pliers and either expand or contract the bend in their pushrods to line them up.

It is important to note that the travel or end-point adjustments in the transmitter should never go past 100 percent, as this can overdrive and damage the linear servos. Also, it doesnt result in any more control throw for a particular surface. There is a difference of 1mm between the high and low rates for the elevator and rudder, and 3mm for the ailerons. All travel is measured at the surfaces widest point.

The two, main landing gear struts plug into the bottom of the engine nacelles and can be removed if desired. When flying the Mosquito around, it sure looks better to have the gear retracted rather than hanging out.

SOME COOL DETAILS AND SCALE IDEAS

ParkZone has done a nice job with getting the Mosquitos outline quite accurate. For a stand-off scale, micro twin, you would be hard-pressed to find anything better looking that actually flies. ParkZone also got the propellers correct by using counterrotating, 3-blade airscrews. They look great when theyre spinning with their painted yellow tips. When looking at the Mossies removable nose hatch, you see the protruding 7.7mm Browning machine guns, and when you turn the plane over, there are the four openings for the 20mm Hispano cannon. The cockpit framing is painted and there are two molded seats inside, which adds a nice touch.

The camouflage scheme and the markings are nicely done, with low-visibility, night-fighter Type B roundels on the wings, and twin-engine fighter/light- or medium-bomber Type C-1 on the fuselage. The letters on the fuselages side indicates it is from the No. 21 Squadron RAF.

If you want to add some more details to your Mosquito such as full cockpits, scale landing gear or exhaust stacks, antennae, etc., Google 1/32 scale Mosquito and check out the 4.5 million hits that come up for that search. Yikes! They contain many sites that sell entire plastic models or addon parts, which would add further scale detail without adding too much extra flying weight.

For the test flight, it was a sunny, windless day, with a temperature in the high 30s. The strip was a little rough for the Mosquitos small wheels, so a hand launch was in order. The Mossie does taxi and will ROG off a smooth surface, but one wasnt available at this time. By the way, when the motors were run up, they had that familiar sound of two props running slightly out of sync; so, if you have the opportunity to takeoff the Mossie from a smooth surface, its best to quickly advance the throttle to 2/3 and go. If necessary, use the rudder to keep the tracking straight, but with counter-rotating props, that shouldnt be necessary. 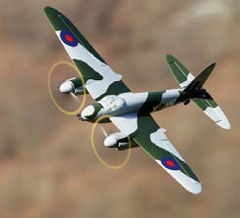 Once the radio was set and the flight controls were checked, a quick blast of throttle was given to feel the pull of the two motors”definitely more than enough to fly this 2.6 oz. airplane. At 2/3 throttle, the Mosquito was lightly tossed and away it flew in a nice gentle climb. A couple of beeps of down trim with a reduction to 1/2 throttle and the Mossie was flying straight and level, hands-off.

Next up was some inverted flight, which requires a small amount of down elevator input to maintain altitude. The Mosquito makes nice big loops and rolls fairly well, and can perform spins. The rotation stops when the sticks return to neutral. Overall, it is mildly aerobatic, but certainly not meant for 3D flying. Its more comfortable with low-level strafing runs and flying circuits around the field.

The power-off stall has the Mossie falling forward with a slight mushy feeling, but it doesnt drop a wing. It is very stable laterally.

To check the gliding capabilities, I took it up to a high altitude and chop the throttles. After I added a little up trim, a fairly flat glide-angle was established, and I was able glide it in for a smooth touchdown. Landings with the power on proved to be uneventful, as well, as the model is so stable that it can be brought in at a medium speed (about 1/4 throttle), and once over the runway, the power can be gradually reduced until the Mossie smoothly touches down for a soft landing.

All in all, a great flying experience was had from this little foam warbird. This model is for intermediate to advance flyers, as it moves too quickly for beginners to think that fast. Also, to really enjoy the flying experience, youll want to fly it in winds of less than 5 mph.

THE MOST NUMBEROUS MOSQUITO VARIANT

Of the Mosquitos 43 Marks built by various countries, the FB (fighter/bomber) Mk VI variant was the most numerous, with 2,298 of them being built. That works out to being approxinmately 1/3 of all the twin-engine, plywood/balsawood/spruce-constructed de Havilland masterpieces produced. This is somewhat ironic, as the original Mossie concept was to be an unarmed bomber.

In the summer of 1941, the first work began on the FB Mk VI, and on June 1, 1942, the Mk VI prototype flew. In February 1943, production aircraft began to arrive. Early versions were powered by two Rolls-Royce Merlin 21 or 23 engines. These were later replaced by Merlin 25s. With a wingspan of 54 ft., 2 in., the Mosquito had a maximum speed of 366 mph with the Merlin 23s, and a service ceiling of 29,000 feet. After some changing of the exhaust stacks and some servicing back at the factory, the top speed was improved to 384 mph.

The Mk VI combined the Mk IIs four .303-inch Browning machine guns and four 20mm Mk II Hispano cannon with two 500-pound bombs carried in the aft, internal bomb-bay and, if so required, two more on wing racks for a total bomb load of 2000 pounds. It was the RAFs most formidable fighter-bomber.

On May 11, 1943, the first Mk VIs entered service with the No. 418 Squadron RAF and eventually were found in 26 others. It saw service throughout Europe and the Far East, as well as from bases on Malta. Coastal Command also used it against Axis shipping. On February 18, 1944, the most daring Mosquito raid of WWII was carried out by the FB Mk VI during the famous attack on Amiens Prison. In October 1944, it was equipped to carry eight rocket projectiles with which it carried out attacks on German positions. The FB Mk VI, when fully armed, had an effective range of more than 1000 miles. The variant also proved durable in dogfights with single-engine fighter aircraft, when on January 15, 1945, No. 143 Squadron RAF FB Mk VIs with their forward-firing guns was engaged by 30 Focke-Wulf Fw 190s from Jagdgeschwader 5. They shot down five 190s and sank an armed trawler and two merchants to the loss of five Mossies.

SPEC SUMMARY: In less than one hours time, you can have this little twin ripping around your local park. Theres plenty of power for mild aerobatics, and its color scheme is quite authentic, plus there are some nice details that add to its overall appeal. The counter-rotating, 3-blade propellers top off its scalelike appearance and really add to the micro models cool factor! 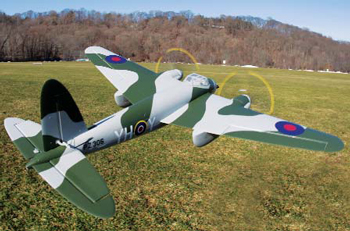 ParkZone definitely has a winner here, even if we were just considering the cool-factor. Plus the fact that it flies great adds to the Mosquitos overall appeal. In less than an hour, it is ready to go on missions to thwart the Axis powers or just chase the bugs in your backyard. And, a multi-engine typerating with the accompanying check-ride isnt required. Pick one up; theyre fun!