Kick That Canopy Up A Notch!

Improve Your Scale Project With A Little Extra Effort.

The finished canopy with all the frames and tubes installeda crisp, clean look!

Flying Styro Kits (FSK) makes a series of fantastic electric single-motor and multi-motor small scale warbird models. Theyre highly prefabricated, but I do not consider them to be ARFs. I classify them as â€œlimited-work flying model kits.â€ All the major and minor foam and plastic parts come painted, but it is not unusual to have to fit and trim many of the parts. I have reviewed many of these models in this 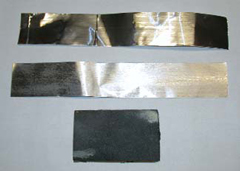 magazine over the years, and they have all flown exceptionally well. My goal in this article is to show you how to rework the canopy to enhance the scale look of these exquisite models and/or make it a little easier for you to have a good-looking canopy.

Sand aluminum tape with 220-360-grit sandpaper to allow the primer to stick better. Sanded and non-sanded pieces are shown here.

The canopies supplied in many, if not all, of these kits are two-piece assemblies. You must cut out a painted frame in the area where the clear plastic will show and then glue it over the top of a frameless, slightly smaller clear molding. Models such as the BF-110 Zestorer and Ju-87 Stuka have over two dozen windows to be cut away from 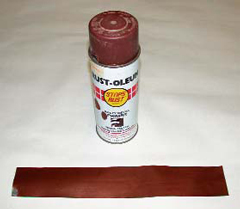 the painted frames. Carefully cutting out all these panels can take longer than assembling the rest of the model! After cutting out this framework, it can be a challenge to glue it over the clear section while keeping everything clean. The frames fit is not always that

Give the tape at least two coats of sandable primer before you apply the final color.

good over the clear masters, and there may be visible gaps between them. On several of these models, I have forsaken the outer frames and replaced them with my own frames using painted aluminum tape applied to the kits inner clear canopy glazing. Here, I describe this process and the use of other materials to enhance the canopys scale look.

Flying Styro Kits supplies vials of matching color paints to touch up paint damaged during trimming and assembly (or accidents). I used one vial of color to put two coats of paint over the primed tape.

The job begins with good detective work to search for documentation of the subject aircraft and the particular version modeled; many WW II fighter canopies were sometimes subtly changed over the course of the War. I have found many â€œprivate walkaroundsâ€ on the Internet detailing many surviving warbirds. Failing that resource, there are many good books about almost any WW II fighter, bombers and other aircraft. Use a copier to enlarge a good side view and top view of the subject canopy to the right size for the model. Remember that many drawings exaggerate the size of the frames for printing purposes. Use photographs to help determine the true size of any individual frame on the canopy. 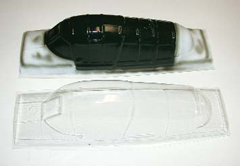 Buy a roll of aluminum tape at a hardware store. Cut a sufficiently long piece to make all the frames you will need. Sand the shine off the tape with 220-360 wet sandpaper, but use it dry. Prime the tape with fast-drying sandable primer. The color of the primer is not important, but use light gray if your final color will be light.

The FSK Stuka kit canopy is shown. You cut out all the â€œwindowsâ€ on the painted version and glue this skeleton over the clear plastic molding. This is a laborious task, and even when attempted by a skilled modeler, the result is often less than good enough for such a fine model. Gaps between the frames and the clear plastic are not unusual. This article describes a better and sometimes less labor-intensive way to produce a great-looking scale canopy.

When the primer has dried, sand it very lightly with 400-grit sandpaper. Apply the predominant color of the frames to the tape. If the camouflage scheme crosses the frames, you can add that color after youve installed the canopy. Flying Styro

Inside the canopy after the tubes have been installed.

Kits supplies mineral-spirit paint in small vials of fuselage-matching colors. There should be enough to coat the tape twice. 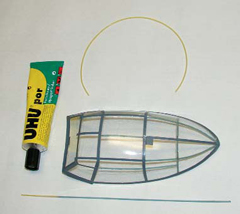 On a hard, clean surface, use a sharp razor knife to cut the tape to the width of the particular frame to be modeled. Stretch the tape around gentle curves at the edge of the canopy; in most warbirds, most of the frames were straight, since they were

The Mosquito canopys inner tube frame is represented by small sections of Sullivan 1/32 pushrod sheath cut to the correct lengths. The sheath pieces are sanded and painted in the same colors as the subject vehicles interior. Warm the plastic sheath with a heat gun to curve it to fit the canopy before you glue the two together with contact cement; I used UHU Por.

easier to fabricate for the fullscale aircraft. Start at the aft bottom end of the canopy, and work forward and to the top. It is OK to overlap some of the pieces, as this was also done on the full-scale aircraft. Follow the documentation pictures you obtained to guide you. 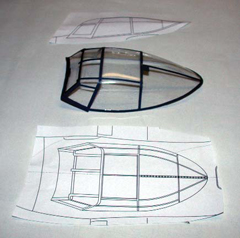 Certain aircraft, including the de Havilland DH98 Mosquito used in this article, had an underlying aluminumtube structure to which pieces of flat or formed Perspex (an early form of Plexiglas) were bolted. Where stresses were likely to be high,

Pieces of painted aluminum tape are applied to the clear canopy in such a way that they replicate the frames on the subject aircraft in this case, a D.H. 98 Mosquito. Enlarge drawings from a reliable source to the same size as the model to help you with placement and size. The underlying tubular frame structure of the full-scale Mossie is replicated with plastic tube.

aluminum straps were run around the outside. Canopy areas such as the aft portions did not have outside straps. The inner tubes were visible through the formed sections. I decided to attempt to model this feature on my 47- inch FSK Mossie as practice for scratchbuilding my 81-inch exact scale version. 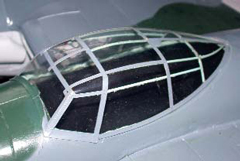 To create the look of the formed-aluminum tube, I needed something light, malleable and small in diameter to glue to the inside of the clear canopy. I experimented with 1/32-inch-diameter aluminum tube, but it had to be bent to the exact shape of the canopy to avoid having gaps. This was not easy to do. I

The canopy installed on the FSK D.H. 98 Mosquito according to the instructions. Doesnt that look much cleaner and sharper!

searched the shop again and found the outer plastic sheath for Sullivans 1/32 cable pushrods. Its a little larger than 1/32 inch, but it looked about right for a model of this size. 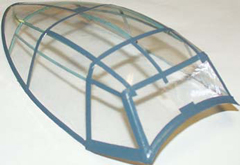 With low heat, the Sullivan plastic sheath is easy to curve gently, and it accepts paint and glue well. I cut the pieces to length, painted them with the appropriate pale blue and glued them to the inside of the canopy with UHU glue. This is the glue FSK recommends for the assembly of most of the rest of the model. It is a contact cement that is usually applied to both surfaces and allowed to dry before the surfaces are brought together. It can also be applied to only one component if you do not let it dry too long before bringing the two parts together.

When the glue has dried, apply touchup paint before or after you install the canopy on the model. Glue the canopy to the model according to the instructions, and transfer any camouflage pattern onto it. 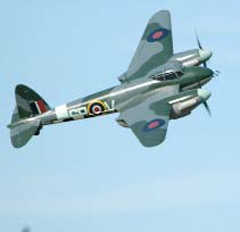 Finally, take your model out and fly it with your â€œkicked-upâ€ canopy. Though it wont be obvious in the air, the models new look is sharper and quite stunning when its parked on the apron. And, of course, you can use these techniques on similar projects.