Beyond a fabulous setting and hospitality, the JR Aero Tow offers the opportunity to see fine scale sailplanes literally sourced from around the globe. From scratch-built on a budget to top dollar composites, spanning two meters to ten, from simple fabric covering to all carbon fiber there is something from every era to meet every taste and wallet.

Perhaps the best aspect is that each pilot is more than happy to talk about their models, share set-up tips, flying experiences and advice. I learned more about programming JR radios in two days than I did in the past twenty years. One could spend the better part of a long weekend just taking photographs and sharing soaring stories. That important fact combined with a gift bag chock-full of JR goodies at registration, raffle prizes galore and a down-home Saturday night barbeque make the JR Aero Tow a must-attend event for anyone who loves sailplanes.

Team Horizon takes responsibility for the towing duties and does a spectacular job. Following a brief pilots meeting each morning, the rule is if there is a plane in the queue it will be toweduntil its too darn dark to tow. In addition to Peter Goldsmith, tow duties were handled by Craig Greening, John Diniz and David Payne. Other than an occasional big lift cycle when the length of the tow waiting line went into the double digits of eager pilots, a wait of five to eight minutes was typical. Frequently, there was no wait at all. And, a quality I love, the pilots were more than happy to tow to extreme heights and limits of sight.

My 4.3 meter Fox from Valenta Models was a frequent recipient of those tows to the moon. Having plenty of altitude translates to ample opportunity

With abundant open space and no obstructions, the only hurdle in landing is clearing the corn at the foot of the runway. Below: HKM Models ASW 28 with an SLS unit took off and climed out with authority.

to wring out an airframe doing aerobatics and all sorts of high speed silliness. The Valenta Fox can do it all and went literally from its maiden flight on Thursday morning to being fully trimmed and tuned for hotrod flying throughout the weekend. 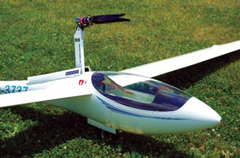 Hosted at the full-scale Illini Glider Club field in Monticello, this is flat land soaring at its best. With a lot of open space, about the worst that can happen is an off-field landing and the resulting walk of shame through the corn. Fortunately, those walks were few and far between.

Each day brought a varied lot of flying conditions from flat air to booming lift to excessive wind to a mixed bag of everything. Operations were only closed for a half hour one day while some rain gave us a quick soak. These conditions kept the flying interesting. With pilots at every skill point from expert veterans to those experiencing their first major aero tow, there were plenty of hands ready to help, act as spotters, or teach those interested in learning. 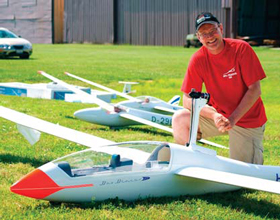 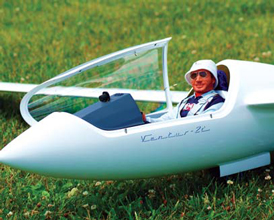 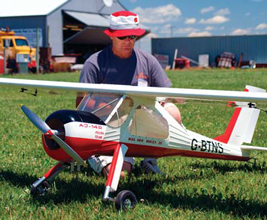 6 meter Ventus 2c on landing approach over the corn. 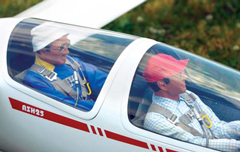 Two of the most impressive airframes both sported self-launching systems or SLS for short. Joshen Luetke of HKM USA flew his 7.2 meter ASW-28 on several occasions to the delight of all assembled. A giant scale sailplane rising off the

A pair of Axel pilot figures dress out a stunning 8 meter Rosenthal ASH25.

ground under its own power is quite a feat. The HKM brushless propulsion unit featured a folding prop, but one that is sprung to fold forward when power is off so the entire unit can fold back down into the fuselage. 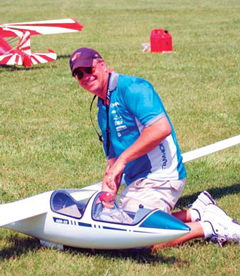 Coming in at an even more impressive eight meters was a stunning Duo Discus X, displayed by Etienne Dorig of ICARE. This model features a Schambeck SLS unit with a unique single blade propeller and counterbalance configuration. Using what might otherwise look like half a blade, this unit extends from the fuselage top via a rail system that requires only a very small set of doors. 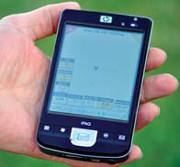 Several pilots enjoyed their first taste of global positioning satellite (GPS) triangle racing thanks to ICARE of Canada. Like full scale sailplanes working a cross country course to achieve the best time, this is soaring from waypoint to waypoint and back home using a handheld PDA to view course and heading.

Handheld device under the command of Etienne Dorig of ICARE shows the GPS racing course.

A small GPS transmitter is placed inside the sailplane which is then towed to 1,500 feet. The sailplane approaches the entry point of the course at no more than 1,500 feet altitude and flies to the first waypoint as quickly as possible. A spotter, studying the PDA, keeps the pilot on course and calls the turns. Two complete circuits of the course constitute a race. While this was all for fun and learning, at the end of the event the fastest time was turned in by Len Buffinton of Killingworth, Connecticut flying a Let Models six meter ASH26.

ASK 13 from the Rosenthal kit spanning 5.33 meters,built by Dennis Brandt and owned by Len Buffinton.

If you love soaring, mark your calendar for June of 2011 and watch the Horizon Hobby website for exact dates on the next JR Aero Tow. Youll join like minded modelers from every corner of the nation for what is certain to be a memorable four days. As crazy as it sounds, Id make the 15 hour drive again tomorrow to attend this event. Its not just the planes, its not just the place, its the people that will have you coming back again and again.