Each year, in the middle of May, a migration of cars and trucks, campers and airplane trailers and RC modelers and their families from everywhere start their trek to the sleepy town of Woodruff, South Carolina. Such is the popularity of Joe Nall Week at the Triple Tree Aerodrome that people get in line just so they can get in line. This year was no different as people were queueing up waiting for the gates to open and the dash to the best camping and parking spots to begin. There weren’t just a few people in line either, there were nearly 250 people waiting in line for the gates to open!

Pat Hartness, owner of the Triple Tree Aerodrome (then Hartness Field) started the first annual Giant Scale Fly-In in 1983. The first fly- in attracted around 35 pilots and the Master of Ceremonies was Pat Hartness’ good friend, Joe Nall. Joe kept the crowd and pilots entertained until his untimely death in a full scale aircraft accident in 1989. Pat renamed the event the Joe Nall Fly-In in Joe’s honor. It’s now known as Joe Nall or, if you’re speaking to folks in the RC community, we simply refer to it as “Nall”. This year marked the 34th year of the event and my 4th trip consecutive to Woodruff.

Located just south of Spartanburg, South Carolina, Triple Tree Aerodrome is a small regional full scale airport on the outskirts of the town of Woodruff. The small town with a distinct Mayberry feel (no Andy Griffith irony intended) probably doubles in popula- tion for the duration of the event. One might wonder how the locals feel about the traffic  and occasional airplane noise, but local eateries and grocery stores have signs welcoming Joe Nall visitors and everywhere we went the locals would strike up a conversation asking where we were from and sharing their amazement that their small town attracted visitors from not only all over the US, but several foreign countries as well.  At Triple Tree their mission statement says it best “The mission for the Triple Tree Aerodrome is to ignite and expand the passion for aviation.” Most of us that show up for Joe Nall week don’t need our aviation passion ignited, but with their mixture of full scale and models and support of every RC flying discipline imaginable, I have no doubt they expand the horizons of many modelers.

In the spirit of expanding the horizons of RC modelers, Triple Tree really does have something for everyone. A winding road greets the visitor at the famous Triple Tree entrance sign that ends two miles later at the lower camping area. In between the gate and the bus turn around you can find a flight line to entertain anyone for days and the only trouble is having enough time to fully enjoy them all.

The first one you see is the helicopter flight line where I ran into several friends with both 3D and scale helicopter models. Former XFC Helicopter Champion Kyle Dahl was laying down the 3D smack and noted scale modelers Sandy Jaffe and Darrell Sprayberry both had scale creations on hand. Sandy was flying an unusual Chinook CH-47 in an equally unusual NASA color scheme. Modern electronics help make these unique helicopters manage- able, but it still takes a steady hand to fly one and Sandy was making it look great.

Adjoining the helicopter area and new this year was a dedicated FPV flight line. I noticed a lot of people were joining in the FPV festivities this year and this growing segment of our hobby was very well represented. While I haven’t been bitten by the FPV bug yet, I have plenty of friends with airplanes and helicopters gathering dust while they hone their new skills and join FPV racing groups. It gave me a bit of a chuckle because for all of the “FPV is killing our hobby” I hear, there sure seemed to be an awfully lot of people there either flying or trying on other pilots’ goggles to see what all the hoopla is about.

As usual, the main flight line was packed again this year. Maintaining a facility like this is a tremendous task and the 1000-foot grass runway at the main flight line was manicured to perfection. The main line is just a portion of the grass 7000-foot full scale runway that spans the entire facility. Major vendors like Horizon Hobby and Great Planes were represented at show center. Sponsor and vendor tents are only a part of the story at the main flight line. The AMA had a large tent and AMA President Bob Brown, Government Affairs consultant Rich Hanson and most of the district Vice Presidents were on hand to answer questions about FAA, Insurance and other matters.

One of the highlights of an event like Joe Nall is the accessibility of top pilots, designers and brand management people from all many of the major manufacturers and vendors. Located across the street from the main flight line is another area for the vendors. Chief Aircraft had a veritable tent city erected with a vast number of their offerings in stock and ready to carry off. One could walk in one side with a credit card and exit the other side with a 40 percent aircraft or new jet ready to assemble. Elsewhere in the vendor area I ran into all kinds of familiar faces. JR America’s had a large booth with their latest offerings and our friend Len Sabato took some time to show us their new products. Speaking of top pilots, Quique Somenzini, Dave Ribbe and Seth Arnold were all on hand showing the latest from Flex Innovations. I would love to mention all the vendors I got to discuss new products with, but I spent about four hours in the vendor area alone taking pictures, renewing old acquaintances and making new friends.

Breaking free of the main flight line and heading down the hill, it doesn’t take long to come up on the 50-acre float flying pond. Sitting in the shadow of the full scale hangar, the pond is stocked with fish for afterhours relaxation and equipped with rescue boats to retrieve stalled or crashed planes. There I saw everything from the new Flyzone Seawind to the ubiquitous foam Beavers and the ParkZone Icons. In addition to the numerous foamies, there were a number of 1/4-scale Hangar-9 Cubs a 30cc Beaver, and even a couple of 30cc Valiants. Dan Landis from Hobbico took some time from the Futaba booth to show me that the new 30cc Avistar handles as well on floats as it does on wheels.

The next area is the all-electric flight line. The Triple Tree crew spent time this year clearing out additional camping space for this increasingly popular area. The flight line is situated on the full scale runway a safe dis- tance down the hill from the main flight line. Electric didn’t necessarily mean small either; I saw everything from micro size to giant scale, EDF jets, powered gliders and pretty much anything this very imaginative group of modelers could dream up and make fly. The extra cleared area did a wonderful job alleviating the cramped feeling the electric line had in previous years. Between Nall and E-Week they are doing a lot of work leveling, rolling and extending the closely cropped grass from the main flight line down to the electric flight line and installing irrigation. All of that work adds up to an even better experience, that’s not only like adding sprinkles to chocolate ice cream, but making the whole thing fat and sugar free! 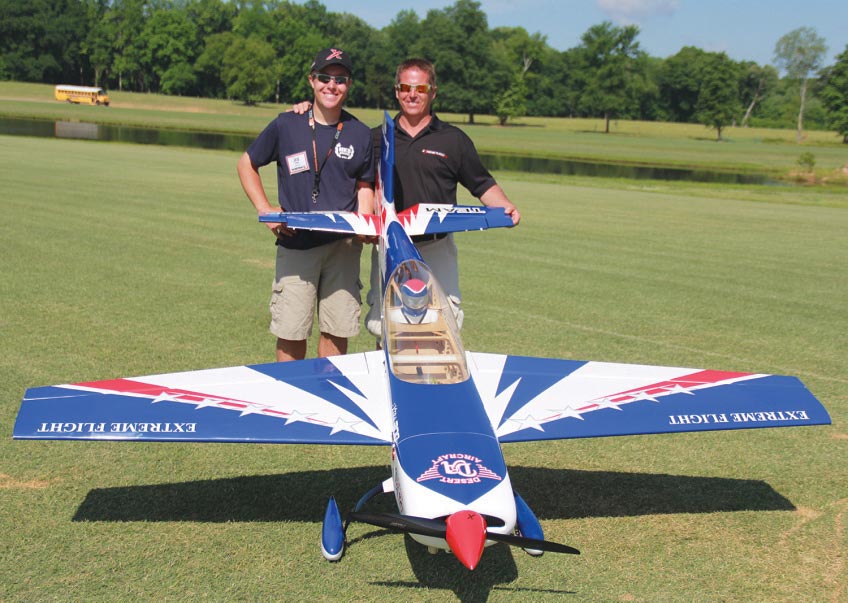 Behind the World War II era control tower are the three control line circles. Such was the popularity of the control line circles at Joe Nall 2012 they were made a permanent part of the event going forward. In addition to the control line stunt competition going on there was one circle dedicated to introducing perspective or curious control line pilots to the sport. Every time I stopped by there was a line of folks waiting to give their trainer a few laps around the circle. In the true spirit of igniting the passion for aviation, the introductory flight group led by Mark Weiss had an award ceremony for their 2000th introductory flight which was presented to Sarah England  at the noon time demos on Friday.

Last and certainly not least, at the bottom of the hill is the 3D flight line. The 3D line is no afterthought either. There’s a gazebo that’s generally packed all week with people watching the action as well as a full bath and shower house complete with washer and dryer. The pond attracts a number of people trying to tail dunk and rarely a day went by without someone dragging a giant scale aerobat out of the pond. Even though I fly a bit of everything, the 3D line is where I find “my people” for the most part.

The flying at the 3D line is nearly 24 hours. While gas planes have a cut off time, I heard electric flying going on from my camper well into the night and it seemed a short time after the late shift shut down for the night when the morning shift was up flying before the crack of dawn. Last year the Triple Tree crew put out a request for quieter running planes and for the most part I didn’t hear any planes this year that were particularly obnoxious as has been the case in previous years.

1723 registered pilots took part in Joe Nall Week 2016 and over 1000 camping permits were issued. While not significantly differ- ent, the numbers were again up this year from the previous year setting another record for attendance. Pilot registrations came from 42 US states and making it a truly international event, a whopping nine other countries!! Including vendors, media, family and spectators, there were just short of 14,000 people that made their way through the gates over the course of the week.

What no article can properly convey, even though I’m going to give it a shot, is the feeling of being part of a large family at Joe Nall. It starts the minute you pull into the gate to check in and keeps going until they are wav- ing goodbye as you head home. Pat sets the tone by hanging around and being one of the guys and it permeates down through the entire staff and volunteers that make Triple Tree go. There was a time I couldn’t imagine going to Nall, it’s a long drive, expensive, too crowded to fly, whatever was going through my head it just didn’t seem worth the trip. Now, after my 4th straight Joe Nall week I can’t even imagine NOT going every year. Like many that plan family vacations around Joe Nall week, I already have my plans for Nall Week 2017 and I hope I see more of our readers there! 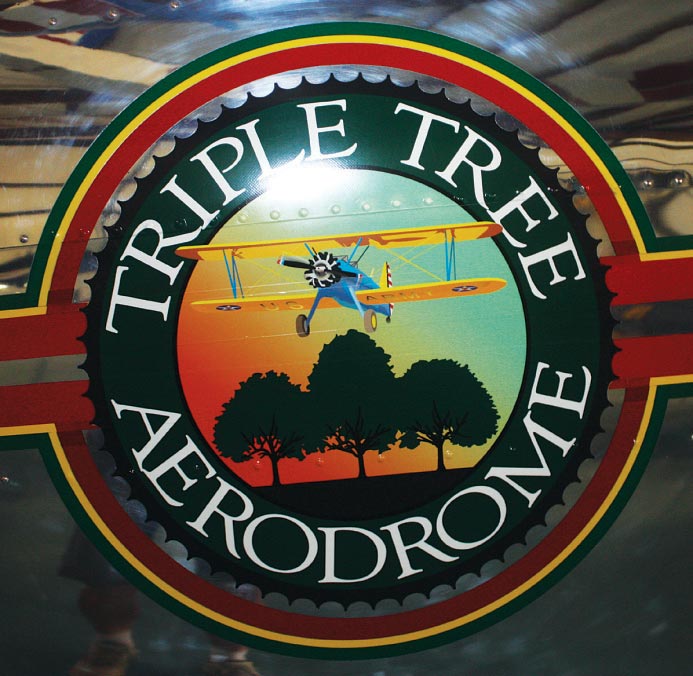 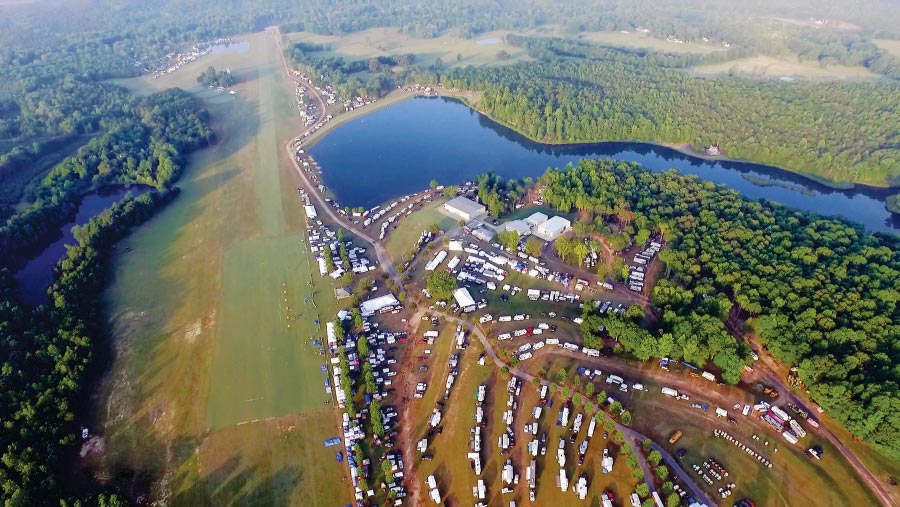 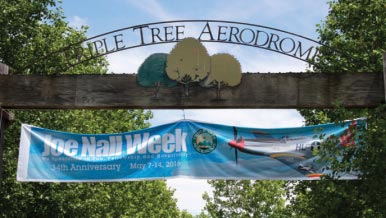