A newer and bigger version of a smooth flying model!

On a Sunday afternoon with the Daytona 500 on the television and the surround sound up nice and loud, I chose to get started on the new Escapade .61. As you would expect from Great Planes, all pieces are individually wrapped in plastic and well packed. As I removed everything from the box, I was surprised and admittedly happy that there were so few parts and pieces. Could I actually get this done in one day?

Constructed of balsa and ply and expertly covered in Top Flite MonoKote, the Escapade includes a two-piece wing, match painted fiberglass cowl and wheel pants, a painted and installed pilot bust, a white 2 Â¾-inch plastic spinner and self aligning and pre-hinged tail surfaces.

Assembly begins with the wings. Youll need two 12-inch extensions for the ailerons servos. Be sure to use shrink wrap, servo clips or dental floss to secure the extensions. A standard servo of 40 ounces of torque or greater can be used on each of the control surfaces. With the servos installed, the two wing halves slide together on an aluminum wing tube and are secured together with a nylon strap and two screws. Be sure to harden the screw holes with thin CA. I suggest temporarily mounting the wing to the fuselage at this point.

Next, the manual has you remove the balsa block at the aft part of the fuselage to slide the horizontal stab into place. Before sliding the tail into the self-aligning slot, use a small amount of 5-minute epoxy to secure the tailwheel assembly into the rudder. After doing so, you can position the vertical stabilizer. I found I needed to bend the threaded wires forward a small amount to get them to slide through the holes in the bottom of the fuselage.

With the tail seated in place but not completely tightened, take a measurement to see that the tail tips are square with the wing tips; 89 cm from tip to tip should be close to what is required for an even horizontal stabilzer placement. Once the measurements are equal and the tail is square to the wing, use a small bit of thread lock on the lock nuts and secure the tail in place. Finally, you can secure the tail-wheel bracket to the fuselage.

I chose to power the Escapade with a bulletproof and extremely reliable O.S. .91FS II. With excellent guidance from the manual, I also chose to remove the forward part of the fuselage and install the fiberglass cowl. It is a cleaner look in my opinion and only took a small amount of time to make the modification.

After powering up the radio gear and setting the control throws, I used my Great Planes CG machine to check the balance. By using exactly what was used in the manual and placing the battery and receiver in the same place, it was no surprise that the Escapade balanced perfectly at 4 inches back from the leading edge of the wing.

A couple more 50-degree snow-melting days here in Connecticut and itll be flying season in no time!

The manual is set up nicely and has numerous pictures to guide the assembly. Be sure to open up the fuel tank and secure each of the connections inside the tank with either tie wraps or thin wire. It is also a good idea make sure you use a fuel filter. Mine is mounted just prior to entering the carburetor and covered with black shrink wrap. Also consider putting a slight bend in each of the control pushrods to the elevator for a straight connection. 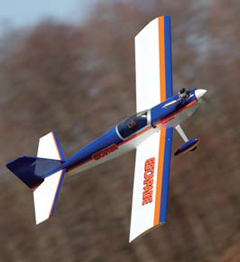 It only took a couple of weeks for the rest of the snow to melt. We had a gorgeous day in March to fly with temperatures just under 40 degrees and a light westerly wind. I also had the help of my nephew Christian, who was visiting from Minnesota to make sure everything went off without a hitch. Thanks for the help, Christian!

Field set up is less than a fiveminute task. Simply plug the aileron servo leads into the receiver and then attach the wing to the fuselage with the two, nylon wing bolts. For those that have a slightly larger vehicle, the Escapade can also be transported fully assembled.

On the flight-line, Christian helped me with a quick pre-flight, control check and engine start. After a quick prime of the engine, the O.S. .91FS II came to life and was ready to pull the Escapade around the sky.

As I taxied out to the end of the runway, ground handling was a snap. Remember to hold full up elevator during the taxi to put as much weight on the tailwheel as possible. Ground track on takeoff was right on. Very little right rudder was needed as the airplane accelerated to rotation speed. With just a hint of back pressure on the stick, the Escapade was airborne and tracking nicely. A turn to the downwind and half throttle were used to trim the airplane. I found the need for four clicks of up elevator and one click of right rudder for hands-off flying.

I am very impressed with the agility of the Escapade. Its nearly full-span ailerons make for nice responsive roll control throughout the entire flight envelope. The recommended elevator throws were right on, but I chose to increase the rudder throw for better hammer heads and snaps.

I found the Escapade very stable and easy to control at all attitudes and speeds. Stalls were straight and spins required the simple release of flight controls for recovery. What more could you ask for? The airplane is also capable of nearly any of the IMAC aerobatic maneuvers, including upright and inverted flat spins.

Landings were similar to landing a high-wing trainer, but with a greater awareness of ground affect. It took me four tries before I finally got the Escapade slow enough for touchdown. I was surprised at the amount of float it has and how slowly I could actually fly the Escapade just prior to touchdown. Ground roll was less than 50 feet on our grass strip. Each flight was close to 12 minutes long using only a half a tank of fuel for each flight. Oh how I enjoy the four-stroke fuel consumption when fuel is $18 per gallon. 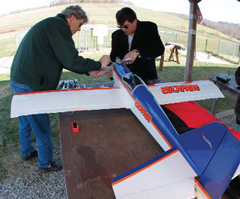 SUMMARY: The Escapade .61 from Great Planes is the big brother to their smaller 52.5 inch Escapade. It yields the same high quality, quick assembly and superb flying characteristics we have come to expect from Great Planes. It can accommodate a wide range of two or four stroke engines or, if you prefer electric, that hardware is included for that option, as well. No matter what set up you choose, youll be happy with your new Escapade .61.

The Escapade .61 is a quick and easy build that can literally be ready to fly in one day. I am happy to report the assembly is very straight forward and can be completed by pretty much anyone with basic assembly skills. All parts fit perfectly, and as I used exactly what was recommended in the manual, the CG came out perfectly without having to move anything or add weight. Total assembly time, including the cowl, was less than seven hours! And, although the O.S. .91FSII is at the lower end of Great Planes suggested engine range, I found it to be more than enough power for the Escapade. What a great sport airplane!