Microaces recently asked their customers what new model they would like to see developed as a trainer? Out of the variety of answers received, one model stood out above the others. With a low wing loading, ample sized control surfaces, a simple, clean airframe and an uncomplicated under carriage, the Cessna 195 is the perfect micro trainer! Sporting an entirely  new wing design, this 18” wingspan, easy build, four channel trainer uses a newly developed airfoil.  A simple fold towards the leading edge of the wing creates an under-camber that improves slow flight performance significantly.  And Microaces has covered all bases by offering three different variations that span the gamut of the real world applications that this enduring airplane still finds itself used in. A military version of the 195, the LC-126 Arctic Rescue with floats, a classic 1950s Businessliner as it would have appeared from the factory and a modern day billboard 195 ‘Estelle’ in bright, attention grabbing colors are all available from Microaces. All three Cessna models are designed to use the Spektrum AR6400 range of receivers, which are currently the AR6410 & AR6410L but will also accommodate the previous versions of the receiver; the AR6400 & AR6400L. And to save buying a receiver for every Microaces aeroplane built, each kit comes with a specially designed receiver clip, that allows the Spektrum gear to be shared amongst multiple models. This significantly reduces the cost of ownership if you do get the bug for building and flying these miniature gems.

Click through to Microaces for more information or to order. While you are there, sign on to receive the Microaces newsletter and you will be entered into a drawing for a free Ready to Fly LC-126 version of the Cessna 195! 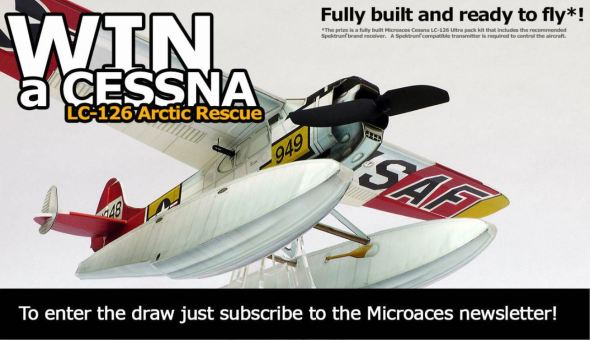