This is another of those places where it all starts to get really interesting. The basic structure of the airplane is complete, and that goes a long way toward defining just what sort of model airplane it’s going to be. If we haven’t built in plenty of accuracy, strength and lightness by now, it’s never going to happen. However, jobs like fitting doors (which we did in the last column), finishing a cowl and things like landing gear fairings, struts, etc., take model airplane building to the next level. From now on everything we do is going to show, whether we like it or not.

The focus of my attention this time will be the engine cowl. This is going to be a big deal no matter what, since this airplane, like all Stinson SR (Reliant) models, features a big round radial cowl loaded with detail in the form of eighteen rocker box cover blisters along with exhausts, access panel and various fastenings that we may or may not want to replicate. The basic cowl is supplied as two sections; a front “bowl” and an extended cylindrical rear base. The rocker blisters, or covers, are all pre-molded plastic ready to be trimmed out of their matrix sheets. As is often the case with simple-looking molded components, there is a lot of work waiting in between taking those parts out of the box and having them function as part of a professional looking job of model building.

On this model, that part of the job gets even more demanding. As designed, the kit’s cowl is intended to enclose and hide an engine while making provisions for cylinder head clearances, exhaust openings, needle valve/choke access and so on. Once the engine is installed and adjusted, the cowl comes off only for maintenance and repair. This Stinson is different, though. As an electric model, it makes none of these demands for non-scale openings in the cowl. The issue of battery access must be addressed however, and since it was clear from the beginning that wing removal for battery charging was out of the question, I had to modify the design with a practical, non obtrusive battery access. Simply removing the cowl would have required pulling the propeller and managing a lot of small screws every time I wanted to charge the LiPo pack. For me, that would have seemed awkward and clumsy and I didn’t want to do it. Since the cowl on the full-scale airplane is split into equal halves down the centerline, I used that feature to define my modifications. The left half of the cowl is fixed to a base mounting ring made of plywood that bolts to the firewall. The right half is held to the left with several plug-intube locating pins and four pairs of small rare earth magnets. It slips off easily for access to my LiPo packs and then snaps quickly and securely back into place for flight. Let’s go build it. 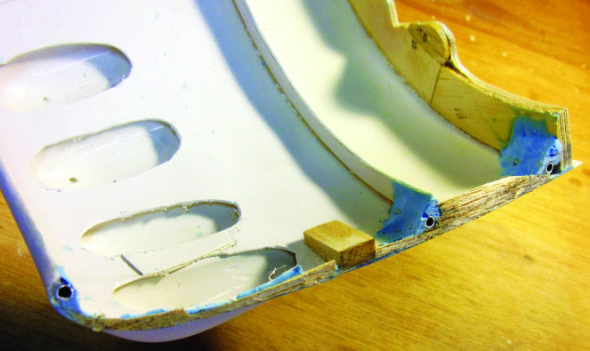