Jeffery Szueber Jr., 17 years old, has been flying RC for almost 10 years. His father, Jeffery Sr., president of the Riverside Radio Control Club in southern CA, suggested to Jeffery that he submit a photo to our SNAPSHOT page showing him torque rolling his Katana-S (kitted by Stan’s Fiber Tech). Jefferey noted: “I really liked the articles I saw in the magazine and I thought I would try to be a part of one.” Thanks, Jeffery, we are more than impressed! Jeffery flew the Katana-S at a freestyle demonstration at a Pylon event in Sepulveda Basin (Los Angeles, California). The airplane is flown with a Futaba 9ZHP transmitter, two Futaba 149DP receivers, Futaba digital servos, a DA 100 engine, Mejzlik 28×10 prop, Powerflite batteries and Smart-fly switches, regulators and equalizers. (Photo taken by Jeffery’s brother, Matt Szueber, 14). As you might expect, the Szuebers are an “RC family” who enjoy giant scale aerobatics. Thanks for the photo, Jeffery! Your one-year free subscription is on its way. 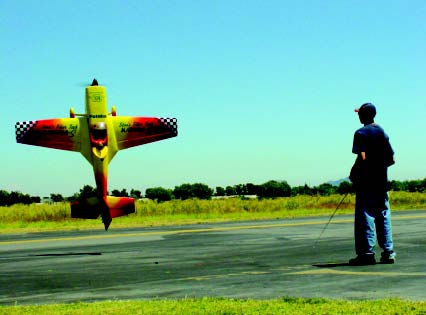 Email your high-res SNAPSHOT to editors@flyrcmag.com, and send a note describing your fixed wing or rotary aircraft. We will send you a free one-year subscription to Fly RC Magazine if we publish your photo!