Team Futaba member Mike Barbee piloted his scratch-built 36% scale Beechcraft T-34 Mentor to first place in the Expert Class. Modeled after a civilian registered aircraft owned by Harold Cannon and still flown actively, Mike’s 148.5” span T-34 faithfully reproduces every detail of its full-size inspiration — right down to the latches on the engine cowling. After evaluating Mike’s aircraft up close, the static judging panel awarded it a very impressive 96.75 points out of 100 possible…almost perfect! Of course, Mike would trust an aircraft of this caliber only to his Futaba 18MZ. He was not the only Team Futaba member who did well at Top Gun this year. Long time competitor Brian O’Meara earned second place in Pro-Am Prop with his beautiful P-47. Team Futaba Manager Frank Noll flew his MB-339 to third place in Pro-Am Jet. Dennis Crooks took fifth in Pro-Am Prop with his amazing C-45. Like Mike, all of these pilots trusted their aircraft to Futaba and the 18MZ.

The invitation-only Top Gun was founded by Team Futaba member Frank Tiano in 1989. Internationally recognized as one of the most prestigious scale aircraft contests, it attracts the best scale aircraft, builders and pilots in the world. The annual event is held at Lakeland Linder Airport in Lakeland, Florida. Hobbico and Futaba congratulate Mike and our other pilots for their fine accomplishments at the 2013 Top Gun! 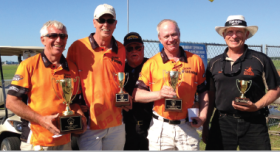 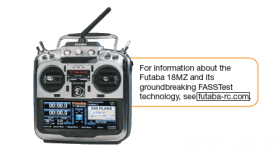