The GyrOne is a self starting autogyro model. An autogyro is a type of rotary wing aircraft supported in flight by the lift provided by a rotor. Unlike a helicopter, the rotor of an autogyro is driven by aerodynamic forces alone once it is in flight, and thrust is provided by an engine-powered propeller similar to that of a fixed-wing aircraft. This model is very easy to fly, similar to a normal plane. Some aerobatic figures can be flown, even if not quite like a plane. The flight performance makes this a unique model in the autogyro field. Take off is operated with pre-rotation of the rotor. Landing can be done with or without the main motor running. The frame is aluminum, assembled in parts with plates and bolts. Some minor parts are plywood laser cut. All parts can be easily assembled including the rotor head. The rotor pre-rotation is can be achieved with a removable battery drill or with an electric motor mounted on the model just below the rotor head. The front landing gear is connected to the rudder motion. The main landing gear is aluminum complete with wheels and plastic pants. The tail has the horizontal part in polyurethane, fiberglass covered, as are the main vertical tail and the two smaller side elements.The front covering of the fuselage is transparent Lexan divided in two parts ready to be painted; their assembly is done with plastic rivets (in the kit). The rotor blades are polyurethane with glass and Carbon fiber covered.

The model is supplied in kit be assembled quickly and easily. The kit is not including the receiver, the servo controls, the batteries, the ESC and the motors (the main and the optional pre-rotation one). The final assembly can be done in few hours, ready for the first flight.There are no construction differences between the electrical and the IC versions. The electric motor is installed in place of the IC one thanks to a proper radial base, the main battery in place of the fuel tank (300 cm3). Both versions have similar total weight allowing for the weight of the fuel. The kit does not include the enamel paint for Lexan parts. 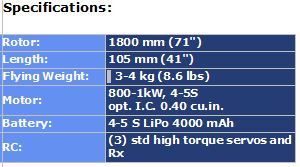