I was excited about the chance to review the Great Planes Yak-55M. The market seems saturated with popular aerobatic planes so its nice to see a new kid on the block! This is one IMAA and IMAC legal aerobat that I knew would stand out at the field. The Yak-55M has great lines, with a large cowl and long sleek fuselage to keep proportions balanced. The huge rounded rudder looks right at home on the cylindrical fuselage. The real Yak-55M was designed with a relatively short wing span to better rolling maneuvers. This plane begs to be 3D! After reviewing the Great Planes Pitts Model 12 for Fly RC magazine last year, I knew I was in for a real treat and my hunch was correct! 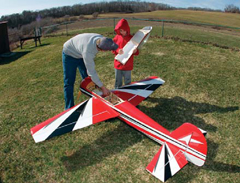 Assembly was straight forward making the Yak-55M an excellent candidate for an entry-level gasser. All control surfaces use Robart-style pin hinges. The aileron and elevator hinges are pre-installed at the factory. The rudder is pre-drilled for hinges but not installed. I installed the rudder hinges with 30-minute epoxy. The scale tailwheel assembly features a carbon fiber leaf spring and uses springs for steering to alleviate shock to the servo. The horizontal stabilizer uses forward and rear carbon fiber carry-through spars that self align in the fuselage. The spars and stabilizer root surfaces get coated with 30-minute epoxy for a permanent installation. The two-piece aluminum main gear slots into the base of the fuselage and gets secured with machine screws. Axles, wheels, and wheel fairings are predrilled and easy to install.

For a radio in this installation I went with Futaba. I installed a Futaba 9156 digital super high torque servo on rudder, each remaining control surface got a Futaba S9155 high torque servo, and last a Futaba 9001 servo on throttle. Controlling these servos is a Futaba R617FS 2.4 GHz FASST receiver. I wanted to keep things simple and light, so I used a single 6-volt 4200mAh NiMH to power the receiver. Each of the servos, except for the rudder servo, was fitted with a Dubro heavy duty servo arm before installation. The rudder required modification of a stock Futaba servo arm by attaching the Great Planes aluminum double-sided heavy duty servo arm to it. The elevator servos mount horizontally under hatches in each stabilizer. Each servo is secured to the underside of its hatch cover that is then screwed into position in the stab. The rudder system uses a traditional pull-pull cable set up. The aileron servos fit conventionally in cutouts in each wing. Control horns are heavy duty plastic and mount securely with wood screws. Oversize 4-40 wire push rods feature a ball joint on one end and a solder clevis on the other to connect servos to their respective control surfaces.

The engine installation went without a hitch. Just lay out the included template for the DLE 55 and drill away! I bolted up the engine to the firewall with #10 socket head cap screws using a large wood washer under each head. This is the first DLE engine I have ever owned and its reputation has it as a dependable powerhouse. Mark locations for the throttle and choke pushrods on the firewall and drill again. The throttle pushrod is a straight shot to the servo with a ball link at the carburetor and a z-bend at the servo arm. Great Planes incorporates a servo cut out for a choke servo. I traditionally opt to install a manual choke, and did so again here by installing a wooden block with a bell crank. The bell crank enables a vertical positioned wire push rod at the base of the engine cowl to operate the carburetor choke lever fore and aft.

Velcro strapping secures the ignition unit and 6-volt 1650mAh NiMH ignition battery forward of the firewall. Before mounting the cowl, wooden blocks had to be installed for the mounting screws. The engine cowl fits like a glove with only slight Dremel tool work required for fuel tank drain and choke pushrod. A final touch was installing the Vess 23A prop. Included in the kit is a vacuum formed plastic dummy engine with added detail of aluminum pushrod tubes. Not being a scale buff, I passed on the installation and was ready for the first flight that much sooner. 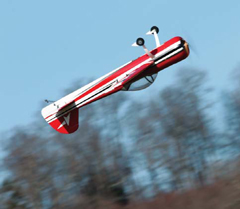 Blue sky and no snow! After a long hard winter we finally had a day of perfect weather, with cool temps and a light but steady breeze. I fueled up the Yak 55M and was ready for my first test run the engine. As I had no previous experience with a DLE engine I was a little cautious. With choke on I flipped the engine through until I saw fuel reach the carburetor. Ignition on, a few more flips the DLE was up and running. I was pleased to say the least that my lack of preparedness was not going to hinder the first flight, nor after advancing the throttle, the pull from the DLE! I did end up richening the top end 1/4 of a turn and with that the DLE had great throttle response, top end and idle. 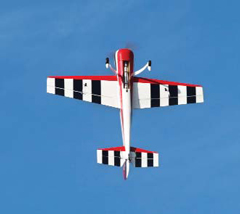 Powering up the Yak-55M got things moving in a hurry. With the long fuselage there were no surprises and with a touch of up elevator I was airborne. I dont know why, but couldnt help myself! I just had to see this gorgeous model dancing as soon as possible. Nearly as soon as I broke ground on takeoff I rolled it once and continued a rolling, climbing turn up to pattern altitude! I trimmed the Yak out with a little elevator and a few clicks of right rudder. I experimented with a series of maneuvers just to get a feel of the plane prior to getting back down low and up close.

I had set up the max controls with conservative 3D deflections and 25-percent exponential across the board. The Yak-55M has a super sweet feel on the controls like an aggressive sport plane might feel with the smoothness of a pattern plane. The rudder has plenty of clout with minimal coupling. Ailerons and elevator too¦ it just feels right! Knife edge passes are a real treat, just as one would expect with a mid wing design. Inverted flight required some down elevator for level flight, but it feels in the groove. Slow rolls with that balanced airframe were very clean, and looked great considering that I had not had a chance to tune the response at all. Snaps and point rolls were easily executed with precision. The roll rate was impressive and as axial as it gets. 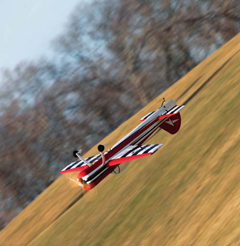 Pulling into loops and into up lines required additional rudder to keep tracking straight. An extra washer under the left side engine stand offs would increase right thrust and should remedy this. Spins were a no brainer with easy entry and easy exit. I tried to flatten out a spin and found it would only do an inverted flat spin. I suspect moving the CG back would improve this.

Next I deemed it time for some 3D. The rollers are awesome, feeling completely natural. I did some harriers and finally found when pushed to the limits the Yak drops the right wing abruptly. Hovering is a walk in the park with plenty of surplus power to get you out of trouble and accelerate vertical.

You will definitely feel the torque of the DLE when there is no air speed. The DLE has a sweet midrange with linear power delivery. Despite having very little time on the engine it never skipped a beat! Landings were anticlimactic with great braking action attributed to the large cowl. Even at slower speeds and nose high attitudes the Yak continued to handle excellently. Applying full up elevator on roll out dramatically reduces speed by increasing the down force on the tail wheel. This came in quite handy while landing long a few times.

FOR: Intermediate through advanced

SUMMARY: Second in the 50cc Performance Series from Great Planes, this Yak-55M is a straight forward build with unlimited capabilities. The Yaks desirable flight characteristics make this plane an excellent choice for a first aerobatic gasser or for pilots looking for something original. This Yak-55M is a real eye catcher and flies as good as it looks!

The Great Planes Yak-55M is a real winner in my books. Quality, fit, and finish is first rate as you would expect. The three-color MonoKote color scheme is quite the eye catcher and contrasting bottom side makes for easy orientation. As I said earlier, this is the first DLE engine I have owned and am quite happy with the performance. With its unique outline and excellent performance, this large aerobat turns heads whenever I fly it.

Im looking forward to warmer weather finally showing here in New England so I can get some more time on the Yak! Happy flying.