One of the most challenging individual maneuvers to fly cleanly is the snap roll. It also happens to be one of the most misunderstood of the different aerobatic elements. Also known as a flick roll in European aerobatic circles, the snap roll shares more with the traditional spin than the conventional aileron roll. Snap and spin maneuvers share an autorotation about the roll and yaw axis caused by a stalled wing and a yaw input. Both aileron and snap rolls rotate the aircraft through 360 degrees, but that is where the similarities end. The important difference is that conventional rolls are primarily an aileron maneuver flown at a relatively low angle of attack, while snap rolls are a rudder/elevator maneuver at a very high angle of attack.

I can remember clearly the first time I rode through a snap roll. While I had been briefed before the instructional flight, I was taken aback by the incredibly fast roll rate, the instantaneous high g-force of the initial pitch-up, and the sudden stoppage back at wings level. I was also amazed that all that power could be harnessed by stalling the aircraft. From that point forward, the snap roll has been a favorite maneuver that I love to perform with both models and full scale. Initially drawn to its dramatic effect on the flight, I have come to appreciate the skill required to precisely execute it. There is nothing more beautiful to me than an inverted 45-degree down line with a precise snap and a half on the line back to upright flight, followed by a crisp pull to level.

To perform snap rolls, it is important to have a clear understanding of spin theory and recovery. Recovery from spins should be second nature before proceeding to snap rolls. For all practical purposes, a snap roll is an accelerated horizontal spin. If you were to allow the snap roll to continue for multiple rotations, the aircraft would bleed off energy and end up in a spin.

We will do the first few snap rolls from a level line. Be sure to start at an altitude that will allow a half-loop recovery from a failed maneuver. Choose the flight direction to perform the snap roll directly in front of you. A snap roll can put enormous stress on the model, so it is important to approach snap rolls with respect, increasing the entry speed incrementally as you gain experience.

Once established on the level line, add enough throttle to maintain a normal cruising speed. Rapidly apply full up elevator and full left rudder simultaneously. Aided by torque, the model will snap more readily to the left. By adding up elevator, you have instantly stalled the wing. By adding rudder, you have induced a yaw force that will cause the autorotation exactly like a spin. As the wing stalls, the nose will yaw and roll to the left. Hold full left rudder and up elevator until you are ready for the snap to stop. The rotation rate may be very high. It will be time to recover before you can blink your eyes. At approximately 45 degrees prior to wings level, neutralize the controls. This will stop the autorotation, allowing momentum to finish the maneuver for you. You will likely need to add a slight down elevator input to re-establish the level line. It may also be necessary to stop the roll rate with a small aileron input. The most challenging aspect of snap rolls for most pilots is to precisely stop the roll. Practice is the only way to perfect the technique required for your particular model.

There are many variations to snap rolls; most deal with modifying the roll rate (faster or slower). Here are a couple of common variations:

1–  To accelerate the roll rate, many pilots add pro-snap aileron (in the direction of the snap). This will allow for incredibly high roll rates.

2–  To precisely stop a snap roll, many pilots initiate recovery at approximately the second knife-edge position, and finish the rolling motion with aileron. This can be considered cheating, as transitioning to the ailerons allows a much more precise termination to the maneuver. In reality though, if it is perceived to be a snap by the judges, then it is a snap.

3–  Another technique for accelerating the snap is to reduce the elevator input slightly after the snap has started. This unloads the wings slightly and, although theyre still stalled, creates a higher roll rate.

4–  Some pilots use very high elevator throws to slow the roll rate. By adding high throws after the snap has started, the model will enter a very deep stall, which will slow the roll rate down. The problem with this technique is that the model may decelerate significantly and appear to wallow. Snapping too deeply causes a very large deceleration and difficult recovery.

5–  While the technique I outlined above only describes a snap roll using left rudder, snap rolls can and should be practiced to both the left and right.

From a level inverted line, apply full down elevator, and right rudder. Thats correct, down elevator and right rudder. Down elevator will stall the wing with a negative angle of attack. The right rudder input will cause the aircraft to yaw to its right, but because it is inverted, it appears to be yawing and rolling to the left. Go ahead and hold your hand up to prove it to yourself. Outside snaps (and inverted spins for that matter) can be very confusing, which is why I recommend making a small plane on a stick. They are very helpful when trying to visualize new maneuvers.

The model will pitch nose up from the inverted position, and a traditional autorotation will occur exactly like the inside snap roll, until the controls are released. Start the recovery at approximately 45 degrees prior to inverted wings level. You may need to adjust the ailerons slightly to stop precisely at the wings-level position. Exit the maneuver in the same inverted level line.

COMMON MISTAKES FOR ALL SNAP ROLLS

1–  Inadequate or late recovery. It is not uncommon for the pilot to start the recovery too late while learning. The model can over-rotate the bank angle by as much as 90 to 180 degrees.

2–  Stalling the model too deeply. This causes a large loss of energy and a slow recovery. 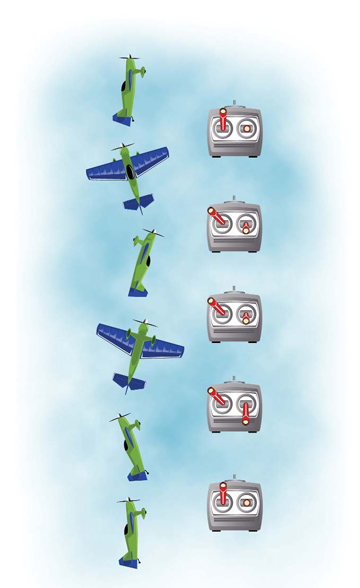 Vertical snap rolls are one of the more challenging maneuvers that you will fly with your model aircraft. Snap rolls, by nature, involve a large pitch and yaw motion. From level flight, the pitch and yaw assist in resuming the level line. There is a positive angle of attack prior to the snap, as well as during and after. A pitch change is necessary, but simply relaxing the stick to neutral after the snap will generally produce an acceptable flight path exiting the maneuver.

Snap rolls on vertical lines are entirely different. Once established on a good vertical line, the angle of attack of the wing is very near zero. When the snap is initiated, the angle of attack has to be rapidly increased to cause the stall and subsequent snap. When you initiate the recovery, centering the stick will stop the snap roll, but not re-establish the vertical line. The model can be as much as 15 degrees or more off vertical. To reestablish your line will require a corrective pitch input beyond neutral stick.

Finally, if there was ever a maneuver that had a high likelihood of exiting into a spin if botched, it has to be the vertical up line with a snap. The combination of a snapping autorotation, high thrust setting, gyroscopic forces and low airspeed make for a very likely stall/spin scenario. Be prepared to close the throttle and initiate recovery.

I hope at some point in your next flying session you will set aside some time to give snap rolls a try. They not only look great, but also add a new dimension to your repertoire of aerobatic figures. Flying snap rolls cleanly is challenging, but if it were easy everyone would be doing it! The biggest gain, however, is the increased confidence you will get operating your model around the stall. The ability to fly snap rolls and spins increases your comfort level pretty dramatically, making stalled flight part of a maneuver rather than part of an accident. Remember, till next timeaerobatics make the world go round.

Share
Previous Art-Tech Cessna 182 500 Class Brushless
Next Kick That Canopy Up A Notch!