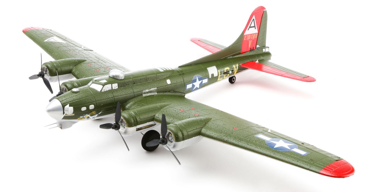 The B-17 is an iconic airplane that just about anyone into aviation can identify with.  It helped turn the tide in World War 2 for the allied forces.  As perhaps the most famous bomber of World War Two it was famed for taking abuse and bringing crews back home even with enormous damage to the aircraft itself.

Many RC modelers dream of flying a B-17 but the expense of multi-engine aircraft deters most from taking on a project such as the B-17.  However E-flite has brought the famed bomber to the masses in a UMX version that is easy on storage and the budget.  Add in the AS3X stability and this little plane will be soaring at park flyer field around the world.

Removable Landing Gear
The plug-in main landing gear can be replaced with simulated retracted wheels and the tail wheel can be removed for an authentic gear-up flight appearance.