For those of you who have been keeping up with this Soaring column, you might remember that I said that sailplanes and gliders are some of the slowest and fastest models on earth.  While the claim to being one of the slowest flying models is easily believable, being the fastest more likely brings doubt.  How can a glider be faster than pylon racers, ducted fan and turbine powered models, that have a tough time staying below 150 mph?  The answer lies within the realm of Dynamic Soaring (DS).

I’m going to let you in on a little secret. Explaining exactly how a glider can go so fast can be explained in one word … propeller. More appropriately, the lack of a propeller is what allows for such extreme speeds. While the typical pylon racer can routinely fly faster than 100 mph, the ability to match a DS speed is limited by the speed of the fan blades or prop blades. Dedicated slope machines are so aerodynamically slick by design, they do not have the limitation of a fan or prop being able to go faster or even worse, creating drag. Once they have a valid design for the plane, use of the proper airfoil design and being built to withstand the stress of this kind of flying, you then only need the right slope and a good breeze. The faster, the better and with that, we have DS flying.

So, what is dynamic soaring and how does it work? I’ll try to keep it simple. First, where can you fly DS? An ideal location is where the wind normally blows up the face of the slope and the slope has a fairly narrow peak (Refer to the drawing below). As the wind reaches the top of the slope, the slope will no longer block the wind and the wind will blow out over the top. If the slope is fairly narrow and has a downside slope close to the crest, the wind will blow over the crest and then straight back over the downhill side. This forms a pocket of dead air on the downhill side which is good. Now let’s do something with that dead air. 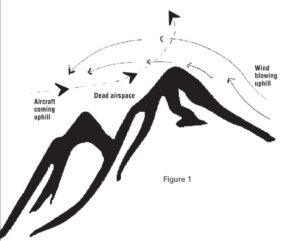 Normally we would fly out over the uphill face of the slope being held up by the wind, but if you have flown any slope at all, you will know that if you fly back past the crest of the slope, the wind no longer holds your plane up. Instead, the wind is now head-on, just like flatland thermal flight, but, you also know that you better have a place to land because you’re coming down … quickly! If you are too far back behind the slope, you will fly into the dead air space. Here is what dynamic soaring does with the dead air. While you fly the uphill slope side, climb high enough so that you know you can circle back around to fly out over the slope again from the backside of the slope. Pull up and over the top and back toward the dead air space. Be aware that your plane will be accelerating as the slope wind pushes you over the top. Now, begin pulling back through the dead air space of the backside and up to the top of the slope. Your model should be moving pretty fast at this time. As the plane catches the wind when it rises above the top of the slope, it will accelerate again and be blown back towards the dead air space. Pull back through again the same way you did the first time and suddenly you realize you are doing Mach speed! This is dynamic soaring and each lap you make in the process is going to be faster and faster. For this reason, know that this is not for the faint of heart for both pilot and aircraft. 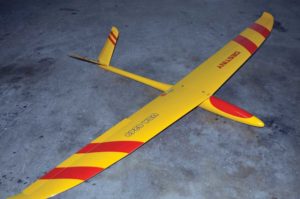 Your timing and reflexes have to be spot on to get the aircraft through each lap.  I suggest not trying to use a standard thermal ship as they are not designed for this type of service. You will need a plane capable of handling in excess of 10 G’s. Normal F3B class models do fine as do the fully molded fast slope machines. Radio equipment in the plane needs to be stronger and quicker to handle the stress and response time needed to maintain the control inputs from the pilot.  As things go faster, speed and response of the pilot become more critical.  I get downright nervous just doing 100 to 125 mph and I’m the slow guy of the bunch!  Consider the timing it takes to fly at the incredible speeds breaking 500 mph … think your present radio and aircraft can withstand the speed and stress?

So, how exactly does this work? As the plane enters into the dead air space, it is no longer fighting a headwind and now flies along with speed enough to pull up the backside slope. As it reaches the top of the slope, the wind that was coming up the slope from the front side hits the bottom of the plane and blows it back over the backside, making it accelerate. You are also now going downhill, which means more speed courtesy of gravity. As you pull through the dead air space, there is no wind to oppose you, and so the plane does little slowing. In fact, if the wind curls over the top of the slope and into the dead air space, the plane will accelerate even more. Now that it is flying faster, it comes back up the backside faster and repeats the cycle, going faster with each lap! To breakout of the circuit, just fly out over the front of the slope rather than completing another lap. 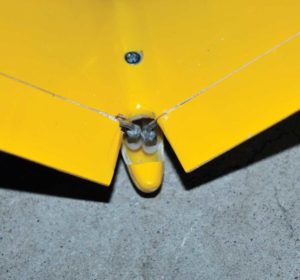 Flying DS is not only an adrenaline rush, but also a real test of nerves and skills. How fast can you make your plane go? Do you dare go faster?  Is my plane capable of going this fast?  How good is your hinging technique, your choice of servos, battery, hardware and is the plane well balanced?  DS flying will tell you how good your reaction time is as well as your aircraft setup, because anything less than optimum will only lead to failure.

One of my recent projects has been the set up of the “Destiny” slope sailplane. This 1.5 meter wingspan model is designed specifically for the slope. While a good wind speed of 15 mph up the hill will give you lively performance, when asked to do DS flight, this little jewel will rip off laps routinely going past the century mark. I love flying a fast ducted fan fighter, but nothing gets my attention like a slope machine close to the deck at speed! If you think you can handle it and also if your plane can handle it, try some DS flying. It will rock your world!

REPAIR TIP OF THE MONTH

Many of us still have a built-up balsa model or one that has laminated wood skins on the wings, such as the Sapphire, Falcon 880, Peregrine and the like and like all other modelers, you want to keep the plane in good shape. So, how do you fix those nasty little dents or compression marks on the wood?  Easy! You can use water, in two ways. The first is to simply place a few drops of water on the dented wood and leave it overnight. The wood should expand back out for you. The second method is to steam out the dent. Take a paper towel sheet and fold it into a four layer sheet. Wet the sheet, but not so much that it drips all over your floor. Lay the sheet over the dent and then apply your hobby iron (set on medium to high setting) to the sheet directly over the dent.  You should hear the water boil in the sheet and as long as you hear the boiling, you will not burn the wood.  Just try the iron for five seconds and then look at the dent. If it hasn’t popped back out, re-wet the cloth and give it another few seconds. I have done this on seriously injured wood with great results and you can even try this on your wood furniture (don’t tell the wife). Give it a shot and you’ll be using this trick from now on. Until next time … Stay aloft!