Beast Q4 Review Article in the March 2015 FlyRC Leads to an Amazing Discovery!

While Steve Broome was showing off his new Beast Q4 and waiting for an upcoming article in March Fly RC, he had no idea that the original was hanging in a garage less than an hour away…Steve had said “goodbye” to his creation at the Wichita Radio Control Auction in the late 90’s and regretted it ever since. Fifteen years later, he decided to build the Beast Q4 seen in the March 2015 issue of FlyRC. 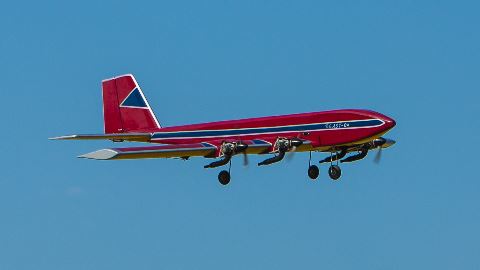 Bill Roberts, owner and and operator of  Wheat State Hobbies in Derby, Kansas, saw a related video on the Beast Q4 article and recognized the airplane as being almost the exact same design of a model that he had hanging in his garage in a partial state of restoration. Bill had always wondered where the unique four engined  model had originally came from and what the inspiration was for its design.

Bill was able to get in touch with Steve Broome through Don Turnock of Eureka Aircraft, the company that Steve has been working with to have a short kit of the Beast Q4 made available. Bill and Steve have since sent dozens of emails back and forth, trading photos and other information. They plan on getting together in the near future to photograph and discuss the two aircraft in person and then hopefully arrange to fly them together in 2015. The first scheduled appearance of the two models  together will be on February 14th, 2015 at the 54th Annual Wichita Radio Control Club auction. Visit www.flywrcc.com for more info on the auction. Come by and see the new Beast Q4 and the original side by side!