I dont know about you, but when I get out to an event and see all those giant aerobatic gassers-25, 30 and even 40-percent size-I get a serious case of the wants, until I snap back to my senses and think about the cost and hassles of transportation and storage of such a beast. The best solution for me is something smaller, though ideally an airplane that doesnt give up anything because of its size. Aeroworks must be hearing this from a lot of their customers, because many of their big aerobatic birds are also available in more modest sizes. Their new 30cc Extra 300 QB is a perfect example, and one I couldnt wait to get together and fly. 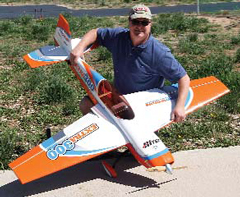 The Aeroworks Extra 300 comes well packed in a single box. I found everything intact, along with two really nice features. The first was a CD-ROM containing the full color manual and the second is the CG Buddy, a tool that makes checking the models center of gravity a breeze by suspending it from the wing tube.

After digging into the manual, I started by installing the servos, servo extensions, control links and control horns for the wings, making sure to pre-drill the servo mount holes and harden them with CA before installing the servos. The ailerons are factory hinged, so I dont have to install them. The wings feature capped ribs with a full D-tube leading edge and a carbon fiber spar tube for optimum lightness and strength. The wing tube is a perfect fit, not too loose, but still easy to install. All in all, the wing is a strong and light design.

I do however have one nitpick with the design and its my only one. The wings are held against the fuselage by a screw and two clipped aluminum anti-rotation pins. The screw is perfect but the clips are hard to insert and remove. I would like to see the clip spaced out further from the sidewall so the fuselage framing doesnt interfere with getting them in and out. The Extra comes with a complete hardware kit that includes the ball links and metal control horns required for a high performance model such as this and it even has extra covering of all three colors for any required repairs.

Moving on I installed the landing gear and wheels. The Extra comes from the factory with carbon fiber landing gear and fiberglass wheel pants. The installation procedure is bolting up (using locktite) the pants and axles then bolting the gear to the hard points on the fuselage. The Extra landing gear is also thoughtfully drilled so you cant install them backwards. The carbon gear appears to be very stout and has an aerodynamic profile for low drag.

Next up were the elevator servos and servo extensions. I found that I had to install the servos into their pre-cut slots simultaneously owing to the limited, but still adequate, clearance. The control rods and horns can then be installed on the elevator by putting the horizontal stab on the carbon join tube and installing the capture screws. You will need to use your longest servo arms to get the appropriate control surface travel and extreme 3Ders will probably want to purchase extra long arms to get the travel they desire. Once again the hardware provided by Aeroworks makes setting up the twin elevator servos quick and easy.

The rudder attaches with the supplied pin hinges using epoxy. Remember to coat the hinge pin with machine oil to keep the epoxy out of the hinge. Here I deviated from the instructions and installed the tail wheel instead of the rudder pull-pulls, they came later. The tail wheel bracket screws into the fin and the steering bracket attaches to the rudder. I managed to break one of the factory springs but found suitable replacements at my local hardware store. After this I installed the pull-pull wires, which brought a pleasant surprise. Unlike many kits, which give you just barely enough wire, this kit included enough to do the job with length to spare. The kit also included the ferrules to clamp the wire. I also added a second set of ferrules on each end to make the connection double secure.

Because the Aeroworks Extra can be powered in multiple ways, it comes with a blank firewall. I used the included DLE 30 template to drill and install blind nuts in the correct position. I created the required distance between the firewall and the prop mount using standoffs and a set of washers and then mounted the engine making sure to use Loctite on every mounting bolt. I have the DLE 30 with a side draft carb, so I fabricated a bellcrank to change the direction of travel of the throttle control-rod 90 degrees.

The most time consuming piece of the construction for me was cutting out the cowl to fit around the motor and exhaust. I used a piece of cardstock to mark out the locations of the cylinder head and exhaust. I alternated between cutting out and checking the clearance until I had the required clearances from all of the parts of the engine. Then just to check, I installed the Bisson Pitts muffler and Tru-Turn spinner for a final clearance check. I should also mention that the cowl is pre drilled for mounting to the fuselage. This is a top-notch touch seen on very few kits.

Fully constructed I setup the control throws on my Hitec Optic 6 Sport transmitter and measured the CG. The control throws were easily achievable and the CG was right on the recommended point with the fuel tank empty after I moved the receiver battery slightly aft. Because the fuel tank is slightly in front of the CG point this setup ensures that no matter how far into a tank of fuel you go the flight characteristics will still be stable. The unique CG buddy makes it easy to confirm the proper balance point. Simply clip it to the main spar tube and anti-rotation pins, and then pick the model up using the handle.

The Aeroworks 30cc Extra 300 was one of the most pleasant building experiences I have had. The airframe couples perfectly with the DLE 30, Bisson exhaust, Tru-Turn spinner and Hitec radio gear. I would also like to thank the folks from Tru-Turn and Bisson for building custom pieces as part of their regular service. The Extra 300 also comes in light for its size and has plenty of room to install the most complex radio gear desired. It also benefits from documentation that is complete, full color and because it is a PDF document fully searchable. 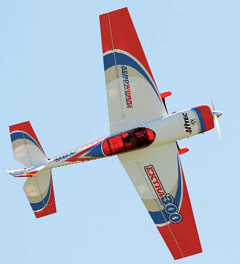 At the field this new Extra 300 is ready for flights after quickly mounting the wings and filling with fuel. I found that the Extra 300 flies muchbigger than it really is. Takeoffs are a breeze and can be easily accomplished at half throttle. I reserve full power for massive vertical runs and if you just want to putt around you could probably get 30 minutes or more out of a tank.

I found the Extra very stable at all speeds, yet it also responds very quickly and powerfully to control inputs and is just begging to be thrown around the sky. It also looks great in the air and has even won over my fashion diva teenage daughter with its color scheme.

After some initial trimming circuits of the field, I continued with a series of loops and rolls. Big, well-controlled loops are almost childs play while the rolls can be slow or fast, brutally fast at high rates. I found just a little coupling with the wings perpendicular to the ground but it was very minimal. This gives a very stable and easy-to-control knife-edge flight that seems like it can go forever. The low coupling level also helps make rolling circles look even better.

This plane performs equally well in the vertical portion of the envelope. Just a little bit of right rudder will keep 45 and 90 degree lines straight and true. When I threw some rolls into the vertical it responded with the same speed and precision that it did when horizontal. Stalls and spins feel controlled and easily recoverable. To execute a flat spin just give it a little elevator, aileron and throttle and boom”flat spin.

Leading with the elevator just a fraction of a second before kicking the rudder gives clean snaps that really made me look. Knife-edge snaps are better than I have ever flown before outside of a simulator, but still need some practice on my part.

The Extra really powers through 3D flight due to its thrust to weight ratio and ample control surfaces. I inverted and upright harriers are quite stable and fun to do. It readily floats down the runway at a high angle of attack and then powers away on command. Pop up from level flight to a wall and extended hover or punch into an extended vertical with ease. The Extra responds well when hovering, and more importantly predictably.

Overall this is one of the most capable and well rounded aircraft I have flown. Another RC pilot I know owns the bigger 150cc Extra 260 QB and after watching my 30cc fly he thought it flies very similarly and is just as capable as his bigger bird.

FOR: Intermediate and advanced pilots

SUMMARY: Aeroworks continues their Quick Build series of aircraft with a new 30cc Extra 300 QB. True to its name, it can be constructed in a few evenings using basic tools. It features the latest techniques to keep the model light and strong and can be built for gas, glow or electric power. The Extra 300 has docile but high-energy performance that will please the most demanding of aerobatic RC pilots.

I LOVE IT! The Aeroworks 30cc Extra 300 QB provides a quick path to getting in the air for hours of fun. This plane has been one solid performer in every aerobatic realm, and the combination of the DLE engine, Bisson muffler, Tru-Turn spinner, and Hitec radio gear has also given me absolute reliability. The Extra performs like a much larger plane with the portability and cost benefits of a smaller model. Aeroworks has produced a complete, quality kit that goes together in a fraction of the time needed for a typical ARF and will soon have you grinning from ear to ear. Give it a try. I am sure you wont be disappointed.