Words And Photos By Scott Copeland Sidebar By Bob Mitchell 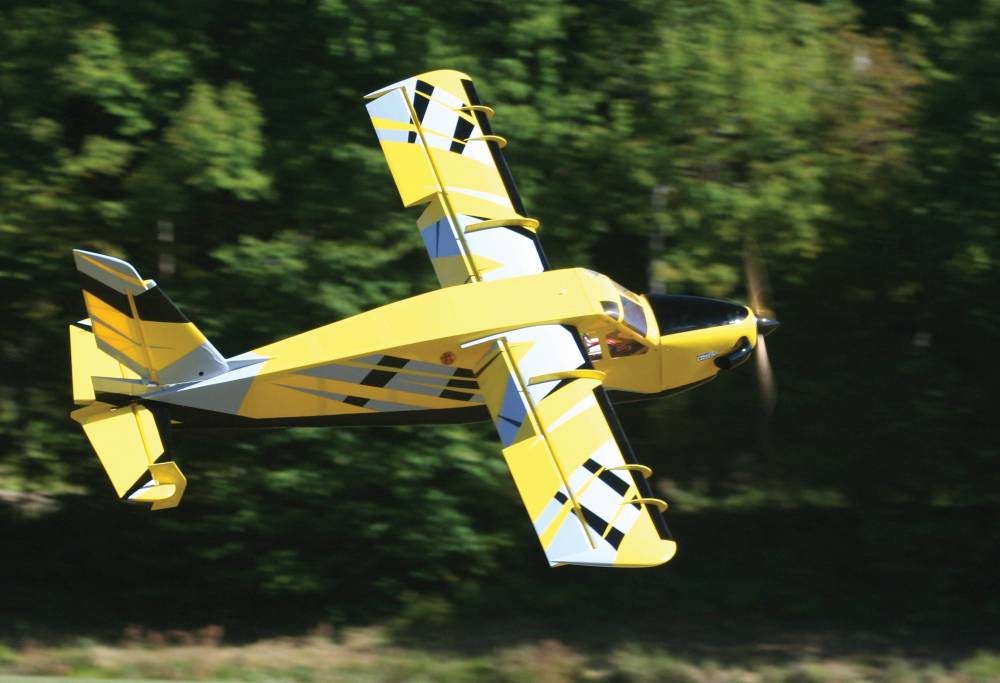 Is this heaven? No … It’s Downsville. For the better part of one week each September, for the last 17 years, Downsville, New York transforms from a sleepy town in the Catskill Mountains to the RC Modeler’s field of dreams. Lying between two adjoining, cloud-crowned foothills rests a grass landing strip that appears to have been placed there by divine intervention. The Northeast Electric Aircraft Technology (NEAT) Fair, sponsored by the SEFLI Club of Long Island, New York and directed by tireless Tom Hunt (contest director), has grown to become the premier all-electric RC event in the eastern United States and attracts pilots and spectators from all over America and Canada. 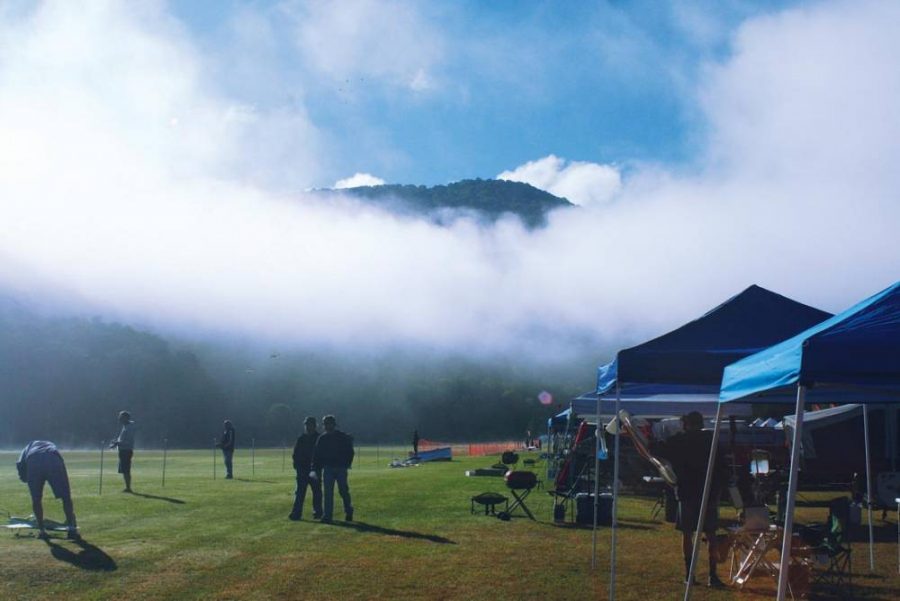 It is difficult to grasp the enormity of this event until you ramble down the gravel road and catch sight of the myriad of tents and can- opies stretching from one end of the runway to the other. In order to stake claim to their spot on the flight line, many pilots arrive before the event’s official Thursday start. Back behind the pilot area, adjacent to the flight line is a very comprehensive “vendor’s row” for all of those purchases you never knew you had to have. There is a tent used as a control center by the SEFLI club and a building that houses the NEAT swap-shop. There are food vendors as well, although many participants bring their own special culinary delights to share— prompting some to dub the event “EAT Fair”.

The flight lines were laid out such that there were distinct areas catering to many different flight disciplines. The main flight line was at center stage  and consisted of six flight stations that were well managed by the SEFLI club volunteers. At the north end of the field was a helicopter/multi-rotor area and at the south end was an area for park flyers. On the opposite side of the runway, accessed through the park flyer area, is a small pond from which floatplanes and flying boats could alight. The early part of the festival enjoyed superb flying weather and the flight lines were filled from dawn until well after dusk.

Every part of the NEAT Fair is a highlight for someone in attendance, including the author. It is impossible to capture the entire event in words and photos, each glimpse a mere pixel of the big picture. Each time you fly one of your planes, or talk to old friends, browse a vendor tent, or watch something on the flightline, you realize that you are inevitably missing something else. But alas, NEAT Fair highlights abound!

Besides the casual flying throughout the day that provides boundless action and eye-candy, there are special events that showcase some of the fun ways people enjoy our hobby. The first 10 minutes of each hour is designated for 3D flying to give aspiring aerobats their chance to wring out their trusty steeds to the delight of the crowd. Every day at noon there are scheduled demo flights featuring some of the best pilots and builders from the electric side of the RC Hobby. There was a Battle of Britain commemorative flight featuring aircraft that would have flown in this historical battle and a ribbon cutting competition with a real Maine lobster roll as the grand prize. Perhaps everyone’s favorite event is the Warbird Mass launch that takes place each evening at 5:00. Set to the music of Ride of the Valkyries, more than 100 foam warbirds take to the air, zipping and darting through the melee until inevitable carnage ensues. The survivor who lands closest to the marker cone in the middle of the field wins half of the entry fee money and all participants get a sticker and a tube of foam glue.

No recent NEAT Fair would be complete without the near-constant stick twiddling of Dan Landis from Hobbico, seen here with his Phoenix Model Stuka. The flight performance prompted event director Tom Hunt to exclaim, “Had the real Stuka flown that well, Germany would have won the war!”

Dan Landis from Futaba/Hobbico delighted the crowd as usual. Flying the Phoenix Model Stuka and Tiger Moth during the noon demos and Battle of Britain commemoration, Dan displayed the skills that make him the consummate professional that he is. When not flying Hobbico brand products, Dan was busy test-flying other people’s machines, including the giant Decathlon of Gerry Jarvis. This gorgeous machine put in the most scale-like performance with loops, rolls, and touch-and- goes, and landings just like its full-size counterpart.

Jason McQuistion brought his enormous Short Skyvan/Space Shuttle Atlantis composite that amazed and delighted the crowd when-ever it flew. The Skyvan transported the shut- tle to altitude and then released the Atlantis to glide (as gracefully as a space shuttle is capa- ble of gliding) back to the field under the guid- ance of Tom McQuistion. The Skyvan spans 165 inches and is powered by two Suppo 90’s with one 125A ESC and one 6S 4000mAh LiPo pack per motor. The combo weighs only 18 pounds ready to fly (14 pounds for the Skyvan and four pounds for the shuttle) and both are constructed from low-cost Dollar Tree foam board!

My flight-line neighbor, Charlie Brown, brought an impressive array of warbirds but the one that stood out was the LX Models B-25 finished in the Navy PB-J color scheme. Being a Navy veteran, Charlie had to have a Navy airplane! The plane was refinished with acrylic paint and the crew members were all painted by hand and given individual facial expressions. The PB-J spans 79 inch- es and is powered by two 600Kv motors, two 60A ESC’s and one 5S 5000mAh battery.

As a builder/pilot from the old school, it always warms my heart to see airplanes built by the pilot, particularly scale models. Every year, Don Belfort brings something new and interesting to NEAT and this year’s creation was a beautiful Nesmith Cougar. His Friday demo flight was spectacular with the Cougar strutting its stuff against the brilliant azure sky. Robert Nesmith himself would be proud!

The most outstanding masterpiece of the event was undoubtedly Rob Caso’s FBA flying boat. Modeled after the Schneider Cup racer from 1914, the little FBA contains so many wonderful details that the viewer must study it rather than simply gaze upon it. The FBA spans 36 inches, weighs a little over one pound, and is powered by a 100W motor fed from a 3S 1000mAh pack. The FBA was flown successfully from the NEAT Fair pond by none other than the man whose thumbs get no rest, Dan Landis.

The NEAT Fair provides something differ- ent for every patron. There is everything from giant scale to the world’s smallest micro indoor RC aircraft, from ballstic jets to graceful slow- fliers, from ARF’s to scratch-built masterpieces and literally everything in between. Sure, it’s not about baseball, or Shoeless Joe Jackson, or Ray Kinsella, but for 4 glorious days every September, it is the field that modelers’ dreams are made on.

ANOTHER WORLD—INDOOR MICRO-AVIATION
Although not directly associated with the NEAT Fair, an unforgettable adjunct with its very own history is the evening indoor micro- and ultra-micro flying event. What these pilots accomplish is the near-impossible feat of successfully flying the almost invisible. Smallest is best, but miniaturization does not occur at the expense of beauty or realism. The degree of size reduction that is possible today is, unsurprisingly, due to brushless motors and Lithium Polymer batteries. This technological “revolution,” which larger aircraft have shared, has a parallel historical technology in the miniature/ micro world. C02- powered motors have also been radically min- iaturized and are flown right alongside the LiPo craft by these avid enthusiasts.

Joe Malinchak is a key player in this precise, refined, game. He has worked out an accurate printing method to realistically embellish thin Durobatics foam sheets to create eminently flyable, very realistic, full-house airplanes. Retracts, ailerons, even bomb drops, are not impossible for these wizards of minuscule whimsy. Joe and his wife Cindy have been organizing these competitions for more than eight years, with entry fees supporting scholarship programs.

Ross Clements started his micro-beginnings with several foam ARF Champs, one of which was lost in a thermal! He and his dad are among the last modelers paying frequent homage to the now highly-collectible Bill Brown CO2 motors, via their exquisite gas-powered creations. Unsurprisingly, he looks forward to a career in aerospace someday.

Paul Strahan,”the Canadian,” builds and customizes a wide spectrum of tiny planes, including a “hot-rod” Night Vapor, whose ultra-fast motor has a minutes-long life span. Mike Cripps is another avid micro-builder and flyer, and his distinctive “Aereon 26″ has a full-size prototype. The real one was intended to combine a rigid airship with a lifting body to cary substantial cargo to undeveloped areas for missionaries. Only one full-size prototype was ever built, and it’s very likely his is the only model, as well.