The words Depron and high speed are rarely found in the same sentence. Describing the Gordo, however, calls for an exception. The Gordo is a small, purpose-built speed plane made almost entirely of Depron. It has achieved speeds of up to 139mph using a $90 power system, which includes the LiPo battery, brushless motor and speed control. In this article, I provide an overview of the project; youll find a detailed report with videos, more photos and many additional technical details, here in this extended online article.

The motivation for this project was the Fastest Foamy Challenge started online at RCGroups. The rules stated that the airframe must be scratch-built out of flat foam, e.g., Depron, with a minimum of carbon-fiber reinforcement; the retail cost of the entire power system (batteries, motor, ESC) could not exceed $100. Video footage of the official flights was also a requirement of this online challenge. Using Doppler software, the video would be used to determine the official flight speeds. The Gordo speeds have been verified using both Doppler and an onboard How Fast airspeed indicator. The Gordo is still the record holder, as we go to press, at a top speed of 139.6mph. The Contest thread is still open on rcgroups.com in the Scratchbuilt Foamie forum.

Power System
The Gordo evolved in an attempt to build a minimum-drag Depron airframe around a small, high-speed power system that used a 3S 1200mAh Zippy LiPo battery. This power system was developed by Bob Vincent and I for a previous scratch-built micro pylon racer project called the Micro Stinger. Extensive tests of the Micro Stinger proved that 140mph was possible on 3 cells using an efficient airframe along with a high-quality, yet affordable, power system. The custom motor used in the Gordo was a single stator Littlescreamer that had been rewound for 6 turns of 22-gauge wire in a star configuration. This motor draws about 250 watts and spins a custom 4×4.75 racing prop at 27,000rpm.

The E-flite Super Airliner DF ARF was modified to launch the Gordo. This worked better than earlier experiments with a custom ground dolly. 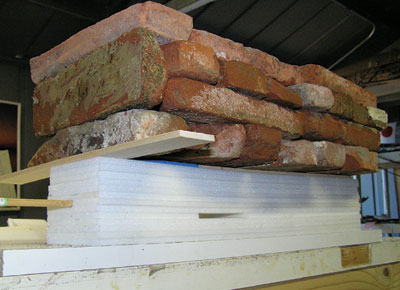 The aileron was cut free from the wing using a Zona universal saw after the airframe had been painted. The aileron was hinged to the wings top skin using regular shiny Scotch tape. The torque rod for the aileron was built out of 0.032-inch-diameter K&S wire. To eliminate additional linkages in the fuselage and save space, the torque rod was designed to exit the wing and go straight up through the servo arm.

A round fuselage would produce the least drag for a given area. To keep it simple, I used my household drill as a lathe to accurately turn the Gordos round Depron fuselage. I began the fuselage construction by stacking several layers of 6mm Depron sheets together using 3M 77 spray adhesive. I put a wooden dowel in the middle of the center sheet and tack-glued it into place with 5-minute Z-Poxy. The dowel was then supported on both ends and spun in place using the drill. Beginning with coarse 60-grit sandpaper and transitioning to fine 320-grit toward the end, I sanded the fuselage to a round, compound curve in about an hour. The last step was to split the fuselage down the middle, remove the dowel and hollow out the fuselage with a Dremel sanding disc.

With the major airframe components completed, it was time to start working on a low-drag external finish (see the Web article for details). I chose Dymond 4.7-gram servos for both the aileron and the elevator. In my experience, these affordable servos have very tight tolerances and are perfect for a small speed plane that requires only 2mm of total control-surface deflection. I used the Berg 4L micro-receiver from Castle Creations with a base-loaded antenna. Winged Shadow Systems also makes a very compact airspeed indicator called the How Fast; along with the See How, the How Fast is a great tool for testing the performance of various motors, LiPos and props. The Pitot tubes for this instrument were installed at the top of the vertical stabilizer above the prop blast. After a flight, the data from the How Fast in the tail compartment is downloaded to the See How for analysis.

CREATING A LOW DRAG FINISH
With the major airframe components completed it was time to start working on a low drag external finish. To go as fast as possible, the Gordo was going to need a very smooth finish like a hollow molded composite airframe. Fiberglass was however not allowed in this challenge so I used a technique recommended by experienced depron builder Rodger Hecht.

The Gordo received 3 coats of WBPU and after each coat the surface was again sanded with 320 grit sandpaper. After a lot of sanding, the surface finish was now comparable to most fiberglass models and ready for a high visibility paint job. Krylon Short Cuts is a small aerosol spray paint that dries quickly and covers well. Prior to painting I place the spray can in warm water for a couple minutes. Heating the paint allows the paint to flow better on the painted surface and resulted in a smoother finish. This paint is available in most standard colors and is widely available at many craft stores such as Michaels.

E-FLITE MOTHERSHIP MODS
Brent Hecht was the builder and pilot of the E-flite mothership. Brent improved the performance and lifting capacity of the E-flite airliner by replacing the stock motors with 2, $16 HobbyCity heli motors part#:

The E-flite 3-blade stock rotors were also replaced with 2.56 inch Haoye rotors from Hobby City.  These rotors are more scale, provide better thrust, and are drop in replacements. This upgrade made this E-filte airliner a perfect mothership for the Gordo.  The Airliner was also given some longer landing gear to make room for the Gordo underneath.

SKID TAPE
The Gordo has skid tape on the bottom of the fuselage to allow it to land on paved surfaces. Landing on a paved runway might sound tough on the airframe but at 30+mph the pavement actually allows the airframe slide to a stop which reduces strain on the airframe. Despite these nasty low speed habits the Gordo has been flown successfully numerous times and continues to live on.
–Bret Becker

AIRBORNE
The Gordos wing loading of 30 ounces per square foot is pretty outrageous for a plane of this size. It is not easy to get the Gordo up to flying speed. Several launching methods have been attempted. The first was the hand-launch. Bob Vincent has an incredible throwing arm, but the Gordo still needed more
airspeed to start flying. The second method used a ground dolly that enabled the Gordo to take off from the ground as if it had landing gear. The most successful method is the midair launch using a hopped-up E-flite airliner as the mother ship.

Brent Hecht was the builder and pilot of the E-flite mother ship, and he improved the performance and lifting capacity of the E-flite airliner for this project. Details on drop-in mods can be found in the expanded Web version of this article. The Gordo was mated to the mother ship so that the centers of gravity for both aircraft were in the same vertical line. Additionally, the wing incidences for both airframes were also set identically. A servo on the pylon that suspends the Gordo pulls a pin that releases the Gordo from the mother ship. 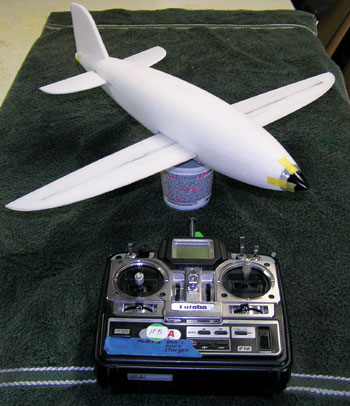 A fiberglass and epoxy finish was not allowed, so instead, the Depron airframe was prepared for paint using several layers of spackle and water-based polyurethane. The finish is just as nice as painted fiberglass.

The Sepulveda Basin in Los Angeles is wonderful for flying, and its long runway makes it perfect for a record-attempting speed flight. Brent made a smooth takeoff, and at an altitude of about 300 feet, he backed off to 2/3 throttle and put the airliner in a slight dive. As the mother ship reached the drop point, our caller, Dave Curtis, said Go and Brent flipped the release switch. The Gordo fell away quickly from the mother ship like a rock. I never dreamt the release could look so smooth. As soon as the Gordo had safely cleared the mother ship, I advanced the throttle, and it was off to the races. It pulled away from the mother ship very quickly and, three minutes later, it landed having made several high-speed passes over the runway in both directions. Each pass was later confirmed to have exceeded 136mph, and the fastest pass was at 139.8mph.

At high speed, the Gordo flies an extremely smooth, predictable course. Its easy to lose sight of the airframe. It will get small very quickly, but as long as you remember to keep it turning, you will be able to keep it in visible range. At speeds of less than 50mph, the Gordo is not forgiving when loaded with the 3S H-Zippy 1200 30c LiPos. At low speeds, it must be flown in a very wide pattern with minimum banking to prevent it from stalling. Final approach is usually long, fast and flat as airspeed is reduced for landing. Despite certain nasty low-speed habits, the Gordo has been flown successfully numerous times, and it continues to live on.

The elevator linkage and the How Fast airspeed indicator are accessible through a hatch in the tail. After each flight, the airspeed data is downloaded from the How Fast to the handheld See How.

Conclusion
This Gordo project started as an idea. The mission was to go fast by combining a minimum-drag airframe with a light, highly optimized power system. The Gordos custom-wound motor using Littlescreamer components draws only 25 amps and is powered by a 3S 1200 LiPo. Its currently the reigning Fastest Foamie with a total power system cost of $89.80 and a top speed of 139.8mph. There is room in the Gordo for a 4S battery, but that flight is being reserved for another day.