The Glue That Binds Us All Together 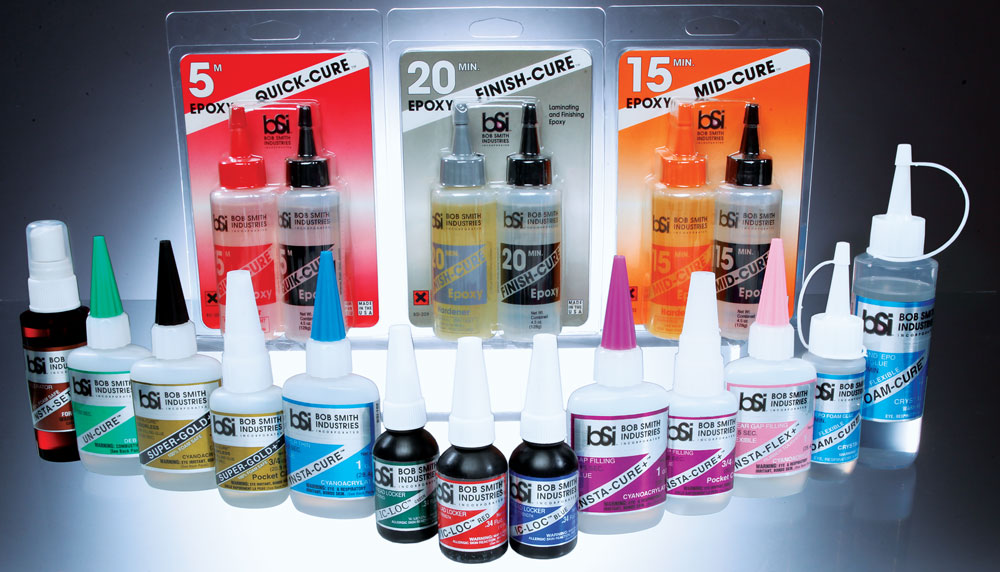 If there’s one thing that is universal throughout the vast and varied realms of RC devices, glue has to be one of the top contenders. I don’t care if you’re a car and truck guy, a helicopter guy or, in the case of most of our readers for this publication, an RC airplane guy … your machine is going to need glue, thread locking compound or epoxy at some point or another in its existence. There are a number of different companies out there that produce such products, but few of them, if any, are as well adapted to the model aviator’s needs as Bob Smith Industries, or BSI. 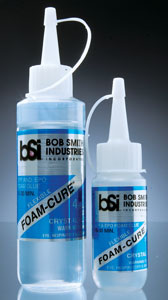 Way back in 1971, Bob Smith started his first company, P.B. Products, focusing on custom built airframes. As a matter of fact, Bob is credited with constructing the first ever fiberglass model airplane, the T2-A. He also received a US patent for his innovative wing molding process as a result of his expert fiberglass laying techniques. After a dozen years of building and marketing his own airframes, Smith sought to provide other builders with the adhesives they were so dependent on in constructing their models. In 1983, BSI was distributing their patented blend of three different epoxies to 20 different dealers. Today, the company offers a full line of CA glues, thread locking compounds, epoxies and specialty adhesives for the modeling and industrial markets with close to 2,000 dealers spread clear across the globe.

Perhaps the most used glues in the model airplane world are the CAs (cyanoacrylate). The fact that there are more foam models out there today than their wooden counterparts only creates a greater demand for such products. CA glues are relatively inexpensive, easy to use, easy to store and transport and they do a great job on many important applications. Long gone are the days of sweeping your crashed plane into a dustpan and preparing yourself for an intensive rebuild process that could take days if not weeks. Stuff your foamie into the tarmac, gather up all the pieces, glue them all back into place, spritz a bit of CA accelerator onto the glued portions and you’re back in the air within minutes or hours! BSI offers up a few different options for foam safe CA that come in varying sizes of containers as well as varying degrees of viscosity. The thicker glues have less of a tendency to run where you do not want them and also take longer to fully cure, allowing for a wider margin for error as parts might not fit perfectly together in an instant. That’s not to say that CA glues are used exclusively on foam constructed models; quite the contrary.

Wooden model construction relies heavily on CA glues as well. Sure, two-part adhesives such as most epoxies are far stronger than most of their CA counterparts, but they are also substantially heavier. When the AUW of an aircraft is of the utmost concern, being stingy with the added weight is imperative. CA is regularly packaged in one to two-ounce containers but a small amount goes a long way. Not only that but they offer superior curing times when compared to epoxy and they don’t smell nearly as bad. Choosing the best glue for any particular application is also of great importance. Balsa, for instance, is a very porous wood that contains a vast multitude of tiny pockets within the wood itself. That’s what makes it so light, but it’s also what makes it harder to glue with standard CA. Thicker, slower curing options are available from BSI so you can be sure that when the glue is applied, it’ll do its job in keeping things where you want them. It’s best to keep any CA stored in a cool place (I keep mine in the refrigerator) and to keep them capped properly. I can’t tell you how many times I’ve rushed out to the flying field before properly stowing my CA and what I’m left with upon my return is a hardened ounce of my hard-earned cash that’s been rendered useless for my purposes. 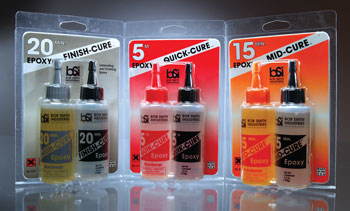 Two-part epoxies are the heavyweights of the glue world. Typically, they consist of a separate hardener and resin which must be mixed together in order to activate. BSI offers up an array of different epoxies that take varying times to fully cure and allow for a much stronger bond than that created by a CA glued joint. Two-part adhesives might be heavier, but for this reason, they also present a great tool for filling larger gaps that might occur in the airframe’s construction or during repairs. Not only that but most epoxies harden to the point where they can be sanded, cut and trimmed or even painted. Proper use of two-part epoxies entails simply having a clean work surface, a scarp piece of cardboard or plastic for mixing the adhesive on and a few simple tools for the application. My shop has a vast array of different adhesives and my epoxies never stray far from my Popsicle sticks and Q-tips. Rubber gloves are also a good thing to have when working with epoxies as the epoxy is tough to get off your skin without the use of caustic solvents. It is also important to use bracing material to keep the two pieces of material in place while the epoxy cures fully.

Lastly, BSI offers a few different specialty adhesives that are aimed specifically at exclusive jobs. Foam Cure is a silicone based glue that was designed for foam constructed aircraft only. It takes a bit longer to fully cure than both CA and epoxy, but once it is dry, it forms a flexible bond that can easily be cut away at some point down the road if needed. It has a smell not unlike regular silicone caulk so the obligatory head rush courtesy of most solvents contained in glue is a non-issue when using Foam Cure.

Additionally, BSI provides a full line of thread locking compounds according to industry trends. Blue thread lock is most common for all metal to metal threaded connections and must be pre-applied before the parts are threaded together. The blue is most widely used as it provides a strong bond, but can usually be removed fairly easily. The red compound is generally used for parts that will not need to be removed. I have been able to burn the red stuff off with a soldering iron a time or two in the past years of modeling, but for all intents and purposes, the red thread locker should be used to provide a permanent bond. The green variety of thread locker is to be used after the two components have been threaded together. The idea is that the liquid wicks its way into the threads to create a tighter bond than just the metal to metal threads.

BSI’s fearless leader, Bob Smith, has had his hands on many innovations in the RC hobby:
• Patent on a wing molding process; check.
• Creation of the first ever all-fiberglass RC model airplane; check.
• Starting a company that has blossomed into an industry-leading selection of glues and adhesives; check.

These days, Smith isn’t slowing down at all. His company is working on a concept aircraft called the Triton, which is aimed at general civilian use, features a powerhouse 450hp turboprop power plant (and possibly even an electric version), is supposed to offer an exhilarating flight performance and looks just plain killer. No matter what type of RC you might be into, BSI has a glue to fill your needs and for those of us lucky enough to be stateside. And if you’re in California, you might be even happier to know that BSI’s headquarters is close by in Atascadero. If searching far and wide through a number of different companies to find the glues and adhesives you need is taking a toll on your flying time, check out BSI. They’re your one-stop shop for all your adhesive needs!