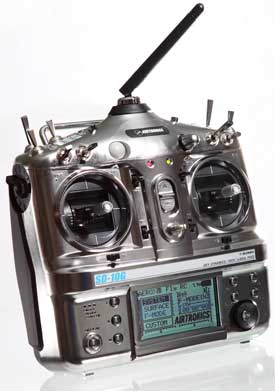 The SD-10G is a 10-channel computer radio system that currently occupies the top spot in the Airtronics ‘Aircraft’ system lineup. The system boasts a rather comprehensive programming suite and supports aircraft, glider, and helicopter model types. It is easy-to-learn, easy-to-use, and remarkably affordable. Plus, as you’ll discover in this review– performance wise, its numbers are not only respectable by today’s standards, they are among the best in the industry.

OVERVIEW
I’d like to begin by stating that to say the SD-10G transmitter is anything less than impressive would be an injustice to the industry. Whether you fly airplanes, gliders, or helicopters—its programming features have you covered. But before we get into that, I’d want to mention some of the system’s general features:

• 10 Proportion Output Channels—Every channel is fully proportional, with position updates in EVERY frame.

• 20 Model Memory—Expandable by inserting the optional Airtronics SD-10G 128K Memory Expansion Card. The card plugs into a slot inside the battery compartment and when installed, behaves just as if it were internal memory. A ‘Safety Link’ feature is available to bind a particular model memory with a receiver; effectively preventing the model from being flown with the wrong model memory selected.

• Low TX Battery Voltage Alarm—Warns you when the transmitter battery pack is at or below 6.7v.

• ‘Display’ Key—View/edit programming without transmitting. This is a nice feature that can help keep the RF noise down at crowded events while your working in the pits.

• Three ‘Direct Model Select’ Keys—Assign one of your favorite models to each one of these keys. Turn the radio on while depressing one of the keys instantly selects its assigned model.

• ‘Custom’ Menu—Add your favorite (or most used) functions to this menu for quick and easy access. 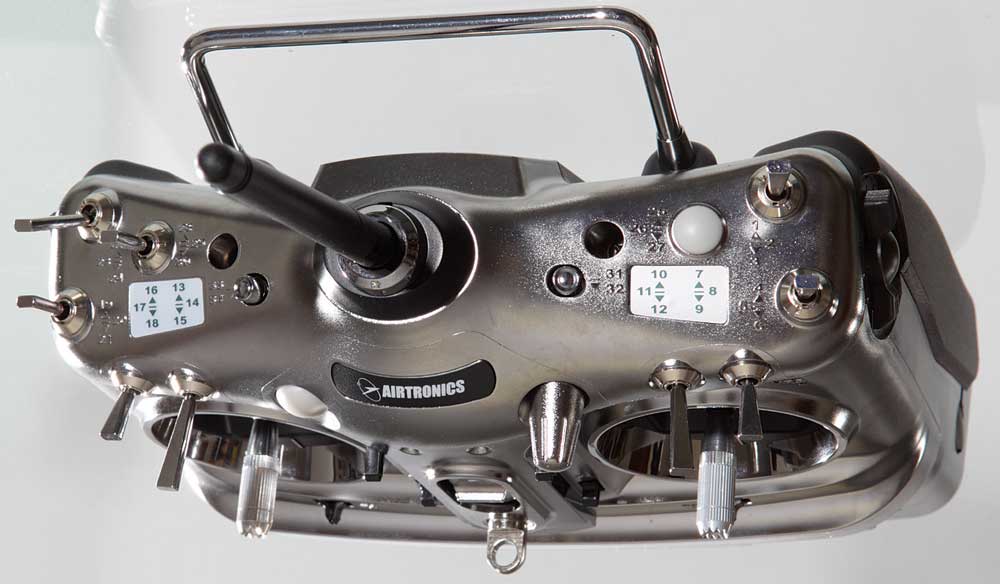 PHYSICAL DESCRIPTION
It’s not often that you come across a radio that fits both ‘thumb’ and ‘pinch’ users equally well. The SD-10G happens to be one of those radios; it just feels right in your hands. Finger grips molded into the back of the transmitter provide ‘thumb’ flyers with a firm, comfortable hold and gives ‘pinch’ flyers something to wrap their pinky fingers around.

Along the top front of the radio are two 3-position switches on the left side and two 3-position switches and a variable position knob control on the right side. You’ll also find a cover over an opening on the left side where another variable position knob can be installed. Of notable mention here is that any of these switches can be moved around to suit your individual needs.

The four main joystick controls have quality action and are all complemented with digital trims. Centering was dead-on and can be verified with using a built-in ‘Stick Monitor’ function. Spring tension, stick length and stick mode (1 to 4) are all user configurable. There are two additional digital trimmer controls just above the vertical joystick trimmer controls. Finally there are two variable position slider controls; one on each side of the radio. Even the angle between the front and rear levers of the slider controls is user configurable.

On the left side of the display are the ‘Display’ button and the three ‘Direct Model Access’ buttons. System programming is performed using controls on the right side of the display. They are ‘Yes/+’ and ‘No/-‘ buttons used for changing field values, a ‘F.MODE’ button used for selecting flight modes while programming, an ‘End’ button for going back and exiting, and an ‘Enter’ button surrounded by a 4-direction dial pad for selecting menu items and navigating fields. The display itself is crisp; however it is not backlit and at times proved difficult to read in low-light conditions.

PROGRAMMING
Suffice to say, the SD-10G does all the usual stuff that we’d expect to see in a programmable radio; servo reversing, centering, end-point adjustment and hard limits. What’s neat here is that all of these settings are accessed from one function called ‘Surface’; essentially a scrollable spreadsheet layout with rows of settings and columns of channels. It’s obvious that the entire programming paradigm of this system was created with a similar goal; making programming (even complex programming) user friendly and intuitive.

Trying to cover everything this system offers is of course beyond the scope of this review, however I’d like to point out some of the more notable programming features of the SD-10G, which include these that are common to all model types:

• Model Type and Templates—Initial model programming is automatically performed by the system. It sets up mixing functions, default switch assignments and the basic programming required based on the type and control configuration of the model selected.

• Flexible Switch Assignments—Functions can be freely assigned to switches. Boolean operators (‘AND’ / ‘OR’) are available to assign functions to a combination of switches; thus eliminating the need to use a general purpose mix for that purpose. There are also some unique functions that may also be assigned to switches; like ‘Increase’/’Decrease’ – which for example can configure a switch to provide in-flight fine adjustments to a compensation mix.

• Stick Switch—Configure a control stick as a logical switch. The point at which it transitions between ‘On’/’Off’, as well as which side is the ‘On’ state is programmable. The switch can then be assigned to a function, just as you would a physical switch.

• Up To 5 Flight Modes—Each flight mode can be custom named and host a complete set of model programming.

• Channel Delay—Adjust the servo speed on up to 5-channels.

• Up to 5 Compensation (CMixes)—Each of these mixes can be common to all or assigned to a flight mode. You can program up to nine points to produce curved mixes.

• Programmable Channel Assignments—Functions can be freely assigned to any channel output.

Rounding out the programming are the model specific features that include: 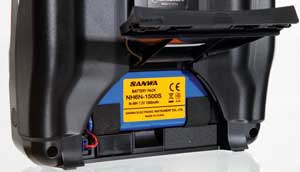 PERFORMANCE
The SD-10G / 92104 produced the following latency times during my testing:
• Minimum Latency: 4.3 mSec
• Average Latency: 10.4 mSec
• Maximum Latency: 16.3 mSec
(Latency was measured on the aileron channel with the model type set to ‘Helicopter’and the swashplate configured as 120° eCCPM.)

92104 10-CHANNEL RECEIVER
The 92104 is a high-speed, FHSS-3, 10-channel receiver. The receiver’s nominal operating voltage is 4.8 to 6.6V DC, although Airtronics does state that it is 2S LiPo compatible. They, nonetheless, recommend using a voltage regulator on any receiver power source over 6.0V in their documentation.

The receiver supports ‘Failsafe’ functionality and features two failsafes; receiver input voltage falling below a programmable threshold of 3.8 to 4.6V, or a disrupted RF link between the transmitter and receiver. You do have the option to inhibit either or both of those failsafes. When triggered, the low voltage failsafe cycles the throttle channel thus giving you an indication that the receiver voltage is low and that you should land. The RF link failsafe is available on all ten channels. Failsafe output position can be programmed or inhibited on a per channel basis. Inhibited channels will hold their last commanded position upon the receiver entering a failsafe condition.

Performance wise, as if the FHSS-3 latency wasn’t impressive enough (see Performance sidebar), this receiver also repeats the servo outputs between frames, which in turn helps to produce superior servo holding power. As such, you are advised that only digital servos should be used with this receiver. If you desire or have a need to use analog servos with the SD-10G, you can use one of the Airtronics FHSS-1 type receivers; which among other operational differences, will output servo positions at a slower (analog servo compatible) rate.

CONS
• Display is not backlit

THE FINAL WORD
As you’re probably well aware, the SD-10G has been around for quite some time; since 2009 to be exact. The fact that it can still hold its own against some of the best radios available, is nothing less than a testament to the effort that went into its design. If you’re the type that demands performance, requires advanced programming features, and don’t like spending a fortune to get them—then you owe it to yourself to give this system a serious look.