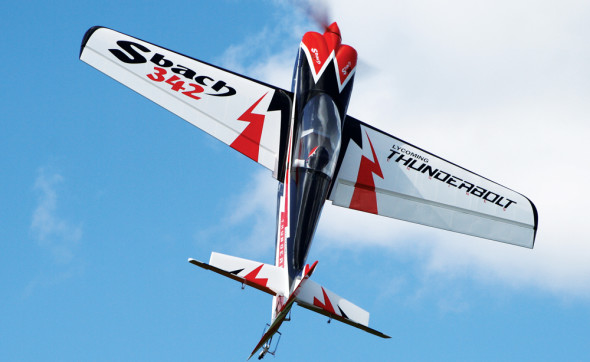 I have been fortunate enough to attend the Joe Nall fly-in the last few years and every time I can’t help, but marvel at how the forty percent aircraft defy the laws of physics. They somehow stay aloft at seemingly impossible attitudes with ridiculously low power settings. Each year, more and more Pilot-RC large-scale aircraft continue to occupy the air. Pilot has made their mark by manufacturing reasonably priced large-scale models with an emphasis on 3D performance. Considering my old school 40-percent Edge which was as nimble and heavy as freight train; it was time for a new plane. The Sbach 342 is somewhat of a hybrid and thought to be a perfect balance between 3D and precision flying qualities. If you add their killer paint scheme, you now have one of the best looking and most versatile 3D aerobats out there.

Author’s Opinion
The 40% Sbach 342 is a truly impressive aerobatic performer. In capable hands it could be an IMAC-ready aerobatic contender, but in my opinion you’ll have way more fun wringing it out with some 3D. High-end accessories are included in the kit and the build time was quick considering the size of the model.

Key Features
• The Pilot-RC 40% Sbach 342 offers an impressive level of completion and quality from the factory.
• There are loads of lightweight carbon fiber components that are obviously functional and add to the overall pro look of this aircraft.
• The best way to describe the appearance of the Sbach is with one word—striking. The color scheme and overall design work in perfect concert with each other.
• You will find nothing, but high-quality accessories with this impressive ARF.
• This 40% aircraft is clearly built for extreme flying with items like the oversize carbon fiber wing joiner. 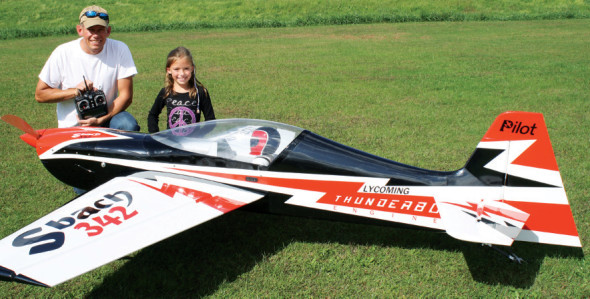 It was amazing to me to see the level of completion that is done at the factory. The covering job is exceptional with contrasting top and bottom sides and factory installed graphics. A few minutes with the iron removed any evidence of wrinkles from the genuine Oracover. The carbon fiber landing gear secures to beefy aluminum angle brackets in the fuselage box section. The wheels and pants installed in a traditional manor with hardware. The carbon fiber tail bracket attaches with screws and a convenient panel allows access to the tail for installation. I installed an aftermarket tail wheel bracket assembly even though the included one is actually lighter and will work fine. Every control surface is pre-installed and ready to go from the factory except the rudder which features a removable pin making it possible to remove the rudder if needed. 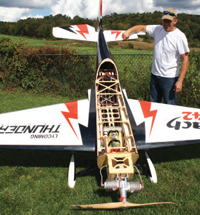 I decided to join the club and go with a tried and proven Hitec 2.4GHz Aurora 9 radio system. The Aurora 9 radio system comes with the Optima 9-channel 2.4GHz dual antenna receiver. Each control was equipped with a Hitec HV high-torque servo with four HS-7954SH on ailerons (two per control surface), one HS-7980TH on rudder, one HS-7980TH per elevator half, and a HS-5685MH on throttle. The Optima 9 receiver and the servos are designed to run 7.4 volt systems which eliminates the need for regulators when using Lithium batteries. I used a pair of Duralite 2600mAh 7.4 volt Lithium-ion Sentinel batteries for the radio system. A nice feature of the Sentinel battery is that it is equipped with a low voltage circuit that illuminates an LED mounted in the fuselage when the pack voltage drops below 7.2 volts. Per Jack Price’s (of Duralite) recommendation, I installed a PowerBox Evolution power system to take on the power loads and protect the receiver in the event of an excessive current draw. The Evolution PowerBox system is as simple as it gets with a digital on/off switch and built-in selectable regulator that I ran wide open to 7.4 volts. 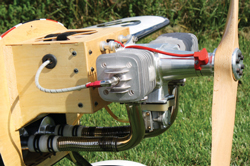 Installation of the flight control servos was as simple as cutting away the covering and screwing into place. The servo receptacles for the HS-7980TH required opening up because of their slightly larger servo case. Each servo is mounted close to its respective control surface in a cutout except for the rudder which is mounted under the radio hatch. A nice touch with the Hitec servos is the array of servo arms that are included with the servo. For the rudder servo I used a five inch SWB swept back servo arm. Each control surface was pre-slotted to accept fiberglass horns that were anchored with epoxy. Included high-quality push rods and ball links installed without a hitch. Another nice note about the ball link hardware was the machined flat for better installation to the servo arm. The throttle servo mounts inverted in the engine box with a short 4-40 solid wire pushrod and ball links. 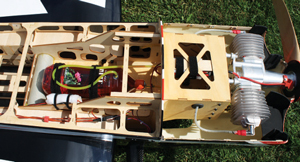 My Sbach kit was an early production unit that required installing the firewall. (I believe they come preinstalled at the factory now.) After glue, machine screws and aluminum brackets secure the firewall in place. I installed my trusty DA 150 on the firewall using one inch standoffs for correct spacing. For an exhaust system, I tucked in a pair of Pro-Flow canisters and a pair of flex headers cut at 12 inches. In order to maximize cooling, additional covering was removed under the exhaust. A little black paint on the structure prior to installation of the canisters seals the wood and does wonders for the appearance. The ignition system was installed inside the motor box for a cleaner installation. Grommets were installed in the holes protecting the electrical wires as well as spiral wrap. I used Duralite 2600mAh 7.4 volt Lithium-ion Sentinel battery to power the system through a PowerBox Digi-switch digital regulated switch. For added safety a PowerBox Spark Switch optical engine kill was added enabling the engine to be shut off with the flick of a switch. The included fuel tank would have worked fine, but I opted for a lighter “Fuji” water bottle style tank instead. The two-piece fiber glass engine cowl comes with a wooden mounting ring. The cowl comes pre-drilled for mounting hardware and screws directly into place to the fuselage with no exterior screws exposed. There are however screws exposed that attach the top cowling to the bottom. For additional cooling, I fabricated balsa ducts at the cowl air inlets to force air directly onto the cylinders. A little black paint makes the ducts look factory. The last and perhaps most important component to the engine installation is the VESS 32B prop, Vess balance ring and the included carbon fiber spinner.

In The Air
I fueled up the mighty Sbach with Jersey Modeler fuel system with a 32:1 mixture of pump gas to oil. My Ole trusty DA started right up after choking. There was a minor carburetor adjustment required for good transition from low idle through full power that I attribute to the different exhaust system. The Pro-Flow exhaust system has a rather pleasing exhaust note. Taxiing the Sbach was straight forward without the need to hold elevator. Advancing the throttle motivated the Sbach to airborne in what seemed like a second thus making it perfectly clear that there was no shortage in power. To be honest there was a brief few seconds to check trim before getting overwhelmed with an over desire to see what the Sbach was made of. The controls felt much better then one would think right out of the box. I set the expo to 25-percent on aileron and 40-percent on rudder and elevator and they seemed ball park. Tracking was exceptional with practically no coupling. Put it this way, I will NOT be using any “P-mixes” on this model. The Sbach feels so light and nimble and gives great feedback thus boosting confidence. I have oodles of experience with 35-percent planes and the Sbach is in a totally different class! Finally, I have in my hands, a plane more then capable of truly awesome 3D. The DA-150 has gobs of midrange with smooth transitions. I experimented with Vess 32A and 32B pitch props and found the 32A more a 3D prop and the 32B to be a great all around prop that ran quieter as well. 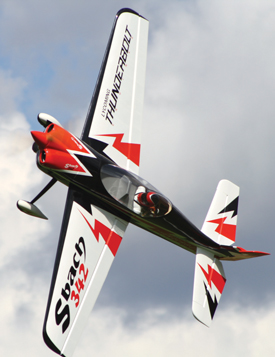 The Sbach is an obvious 3D aerobatic performer and can hold it’s own with precision aerobatics as well. Knife edge and point rolls were awesome. Inverted flight was practically neutral, only needing a breath of down to keep it straight and level. Snap rolls are crisp, flat spins, and blenders are amazing. Recovery from spins is instant with a blast of power, a little opposite rudder and neutral controls. Slowing down for high alpha aerobatics was nothing like I had ever experienced. Slow motion harriers were a thing of beauty with minimal wing rock. Rollers get easier as the plane gets bigger and the Sbach is no exception to the rule. Transitioning to hover was as easy as pulling back on the elevator. I couldn’t believe how there wasn’t any indication of a stall in transition. The generous control surfaces do a remarkable job keeping the nose up and in control. The DA-150 has a very linear power delivery that almost seems electric. Punching out and going vertical showed truly impressive acceleration with a surplus of power to get up to flying speed regardless of attitude in a nanosecond! Stalls were easily manageable with no surprises. Landings with the Sbach are pretty much goof-proof. As sleek as the Sbach looks there is a lot of drag with the thick wing and blunt leading edge. Basically any standard approach angle will do using little or now power on a steep approach or drag it in with power on a shallow approach. Most of my landings were in a three point or tail first attitude because of the small field. Roll out for a plane this size is approx 25-percent shorter then it is with my 35-percenters, which I find impressive.

The Last Word
The Pilot-RC Sbach 342 is in its own class compared to any other model I have ever flown. I found that equipping my Sbach with “fewer servos” then some would opt proved to be a success taking advantage of today’s ultra powerful and dependable Hitec servos. The Hitec Aurora 9 2.4GHz radio system made me a believer with intuitive touch screen programming, buttery smooth gimbals, and ergonomics that seem custom fitted to your hands. The Sbach is a great value, awesome looking, aerobatic thoroughbred that is an absolute blast to fly. If I were to build another, I wouldn’t change a thing.